Ah, the bohemian life of the writer: we never really get vacations, do we? Or, to be precise, our definition of a really fabulous vacation tends to be a few days off in the middle of nowhere, where we can shut ourselves off from outside stimuli and write.

What brought on this little soliloquy, you ask? The answer will give you a snapshot into what it’s like to work with an agent and/or an editor: I’ve been asked to make some revisions on a novel of mine, and oh, could they have them by this time next week?

I haven’t been kidding about trying to help you learn to be flexible. The ability to drop everything cheerfully on a dime and revise like the wind is cherished in this business. Heck, it’s more or less expected.

So I have squirreled myself away from the telephone and laundry for the duration. Just me, my computer, and a couple of clients’ manuscripts to edit, by way of recreation. And obviously, with the PNWA conference so close, and me in the midst of giving you pitching tips, I’m going to keep posting here. Call it a working vacation.

The very fact that the term “working vacation” has made its way into our collective vocabulary makes me wonder about how much the computer has actually improved our lives. It used to be that when you traveled for business, you got to read a book on the plane — now, you work on your laptop instead. One of the charms of being on vacation used to be that you were NOT reachable by phone, but we now regularly hear cell phones ringing on beaches.

It makes one think.

Speaking of thinking — and, I must confess, the real reason for this in-between-posts post — I simply must share the fact that my retreat hotel has been kind enough to provide me with the Minibar of Truth. Take a gander: 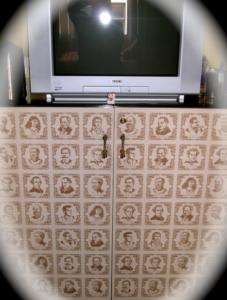 Yes, you are seeing correctly: the furniture intended to house airplane-sized bottles of cognac, leftover Chinese food, and Funyuns™ is indeed emblazoned with the images of the giants of Western philosophy. Or at any rate, the DWEMS — Dead White European Males — typically taught in Philosophy 101. 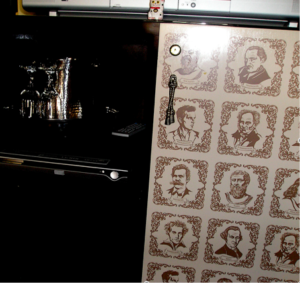 Is the heavy emphasis upon 19th and early 20th century Germany intended as a political statement, one wonders? The designer did make Heidegger — top row, second from the left, just above a crazed-looking Schopenhauer — pretty darned glamorous, I notice, and while every other philosopher is repeated many times over, Hegel appears only twice. Accidental oversight, or social commentary?

(It’s amazing what a writer will do to procrastinate mid-revision, isn’t it? But to paraphrase Socrates, the unexamined cabinet is not worth using — or, at any rate, storing your mineral water and apples within.)

Oh, the pageantry of it all! Descartes is depicted as a cross between a Flemish painting and Cardinal Richelieu, Kierkegaard as Andrew Jackson played by a male model, all sucked-in cheeks and sultry eyes. And Wittgenstein (first column next to the ice bucket, second from the top, under an over-exposed and apparently remorseful Socrates) was apparently Rupert Everett’s identical twin, manifesting a smoothness of shave rare amongst your more serious philosophers of yore. But Nietzsche’s moustache would make anyone think twice about pursuing the life of the mind: 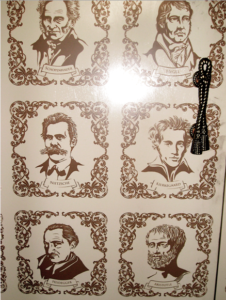 Did the interior decorator place this sterling object here as an inducement to deep thought? Or as an invitation to regard alcohol as an addendum to philosophy?

Perhaps it is an incentive to be fashionable. We should all aspire to be as debonair as Sartre appears here:

But frankly, I don’t believe that Kant was ever this suave. The man didn’t notice the French Revolution, for heaven’s sake; you expect me to believe his linen was this kempt?

Okay, enough with the frivolity: back to deep thoughts; my furniture has high standards for me, evidently. Expect a post on pitching later this evening, the next time I take a break. In the meantime, keep up the good work!