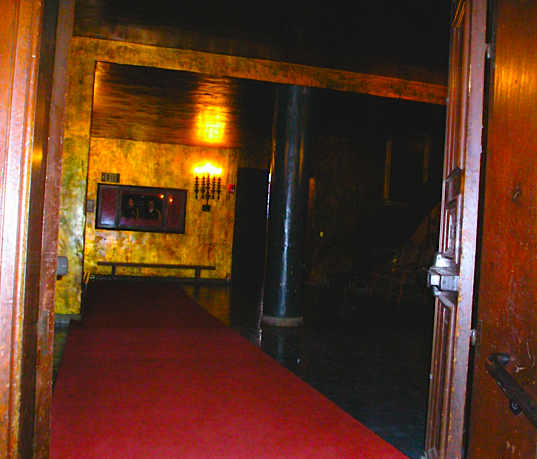 I’m just back from spending the weekend at Harvard, my alma mater, giving a talk about my memoir, A FAMILY DARKLY: LOVE, LOSS, AND THE FINAL PASSIONS OF PHILIP K. DICK. It was, amazingly enough, the first time I’ve spoken about the memoir in public — as in EVER — although I have given a scant handful of print, web, and film interviews since the book was supposed to have come out in 2006. (For those of you who arrived at this community after that furor, a $2 million lawsuit threat had stalled the publication process ever since.)

Well, okay, perhaps that isn’t quite accurate. Since I went there in the 1980s and I possess ovaries, technically, I went to Harvard/Radcliffe; the boys went to Harvard. Seriously, they didn’t start giving male and female graduates the same diploma until just a few years ago.

Not that we chicks minded that or anything.

The Radcliffe part, in case you’re interested, is an homage to 18th-century British novelist Ann Radcliffe, who more or less invented the Gothic potboiler, the pulp fiction of her day. She’s best known today as the author of the works that Jane Austen parodied in NORTHANGER ABBEY, but at the height of her popularity, she apparently sent 50 pounds to Harvard along with the suggestion that they might want to consider admitting women. About a century later, they got around to it.

As time passes, an alumna begins to get dismissive about the Harvard mystique, I notice. Okay, it’s a good school, even a great one, depending upon what one wants to study, but to deserve its reputation, wouldn’t plush red carpets have to be rolled out under students’ feet as they passed, showers of jewels float about them whilst they study, and Nobel laureates chat casually with them at every meal?

I mean, really: we’re talking about the same amenities that other campuses have, right, libraries and professors, just with more money behind them than most?

And then I revisited my old dorm. The picture above shows the entryway to the dining hall.

Yes, those walls ARE made of gold, thank you very much, and during my sophomore year, I lived upstairs from the poet Seamus Heaney. To be fair, though, at the time, he was almost ten years away from winning the Nobel Prize in Literature. But he did occasionally drop by my table to chat at lunch.

Oh, and the libraries were pretty good, too.

My talk was at Vericon, for those of you who did not become heartily sick of my squawking about it last week, the annual convention sponsored by the Harvard/Radcliffe Science Fiction Association. As a founding member (I was known as the girl, thus the inclusion of Radcliffe in the name of the club), my lecture was scheduled to coincide with the 20th anniversary of the group’s inception.

Yes, I am really that old. I don’t believe it, either.

Going back to see the long-term effects of what some friends of mine and I had wrought a couple of decades ago would have been strange enough, even if it hadn’t been — pardon my French — damned hard to set the club up in the first place.

But the fact is, the group’s rise from a handful of SF-loving geeks (admittedly, attractive, well-rounded ones, for the most part, but geeks nonetheless) fighting with the university to establish a club devoted to a book genre that the English department would not even consider touching with the proverbial ten-foot pole to a well-established, well-respected social club that sponsors, with the university’s fervent blessing, a full-scale convention and a magazine…

Well, that’s quite a trajectory for a scant 20 years, and mirrors SF/fantasy’s growing acceptance as literature in general.

It definitely reflects my extended family’s experience over the past 50 years. In the early 1950s, the literary productions of such writers as Philip K. Dick (my mother’s husband at the time) and Alex Apostolides (my mother’s big brother) were considered only marginally more respectable than pornography. (To underscore the irony of this, Uncle Alex was best known for a short story he co-wrote with Hugo Award winner Mark Clifton, “What Thin Partitions,” which appeared in The Best Science Fiction Stories: 1954, along with Richard Matheson’s “The Last Day.” Uncle Alex was also an editor at the Los Angeles Free Press, where for years he was listed on the masthead as Staff Shaman.)

Science fiction, in other words, was a pulp genre utterly dismissed by the literati, if and when they deigned to discuss it, as trash for the masses. The literary mainstream barely regarded it as having been written in English.

A view not entirely dissimilar to that expressed in the mid-1980s by the English professors we asked to be HRSFA’s faculty advisors, incidentally — and virtually identical to the response I received a few short years ago, when I mentioned to a well-respected author who regularly serves on major literary grant committees that I was writing a memoir about my relationship with arguably the most important science fiction writer of the 20th century.

“Science fiction?” the grand dame exclaimed, wrinkling up her august nose; if she’d had skirts to sweep aside, she would have. “Obviously, I never read it. Why would you waste your talent on that?”

Times, as they say, change. Ask the staff of any used bookstore that stocks American literature of the past fifty years, and they will tell you that there are two authors whose books they positively cannot keep on the shelves: Philip K. Dick and Charles Bukowski.

The latter of whom, incidentally, was a writer for the Los Angeles Free Press.

Last year, Philip was the first SF author to have his work published in the prestigious Library of America series, billed by the New York Times Book Review as the “quasi-official national canon” of American literature. And this year, I gave a lecture on his life and work in the classroom that had previously housed my favorite class as an undergraduate — a course taught, come to think of it, by a professor who refused my request to become HRSFA’s faculty advisor.

Wonders, in fact, never cease; if only Philip or Uncle Alex had lived to see it.

How did it feel to give that talk? As the Doge of Genoa allegedly told someone who asked him to name the greatest wonder he saw at the court of Louis XIV at Versailles — pardon my French again — “Ce qui m’étonne le plus ici, c’est de m’y voir.”

To paraphrase, nothing about it astonished me more than the fact that I, of all people, was there to see it. (Did I mention that the libraries at Harvard were pretty good?)

I marched into that lecture hall practically floating upon the otherworldly cheers of that hefty portion of the choir celestial composed entirely of late under-appreciated writers in every genre. I shared the podium with San Francisco State professor and blogger David Gill, who treated us to a trenchant analysis of Philip Dick’s rise to respectability, complete with pictures.

Or is it really respectability? Through a series of sometimes startling excerpts from reviews and articles, some of which were written in response to the release of Philip’s novel anthology by the Library of America, David demonstrated that much of the recent acclaim has been accompanied by some rather nasty back-handed slaps: in the same breath as they call Philip a genius, they call him a madman, a drug addict, a fruitcake.

All of those phrases are lifted from actual articles, by the way.

The audience oohed, ahed, and chuckled as David demonstrated the bifurcated past and current public image. They became rather quiet when I told them who I was — and that I had spent a significant portion of my childhood and adolescence not only seeing the many ways in which that public persona was not an accurate reflection of the man, but observing and even participating in Philip’s creative manipulation of the media to produce that wacky image.

I come by my storytelling credentials honestly, you see, having grown up helping make up stories for a famous man to tell credulous press. Because, after all, constructing fantasy is the family business.

I’d tell you all about it, but the last time I committed my life story to print, lawyers came storming after me. Sorry about that.

Suffice it to say, the audience did not seem to find my truthful account unconvincing. Which is — if I may be permitted to blow my own horn for a moment — saying something, because as Philip taught me, a really well-constructed fiction is not only more entertaining than the truth, usually, but generally more plausible.

Reality has all sorts of rough edges that a smart storyteller will smooth out.

During the question-and-answer period after my talk, a pretty young woman in the audience — who will, because the times they are a-changin’, receive a diploma marked Harvard in a year or two, rather than a hyphenate reflection upon her gender and a memorial to the generosity of Ann Radcliffe a couple of centuries ago — raised her hand to inform me that she had been assigned to read Philip’s work in a class.

As in recently. As in at Harvard. And the celestial choir of genre writers broke into triumphant song.

Just for a moment, leaning on the podium in front of that room full of science fiction and fantasy fans, including one of the very fans from the mid-1970s Philip — yes, and I — had worked so hard to keep entertained with wild pseudo-biography, I felt not only Philip’s vindication, and my mother’s, and Uncle Alex’s, but the hilarious satisfaction of Ann Radcliffe as well. She had a dream of seeing women at Harvard; I had a dream of seeing science fiction and fantasy treated with respect there.

Just because something impressive seems set in stone doesn’t mean that it actually is permanent. A barrier may be hard to move, but impossible? I don’t think so.

And that, in case you had been wondering, is why I never waver in my faith, exhibited here on a daily basis, that good writing will eventually make its way into the public eye. It may take decades of toil, tears, and plain dogged persistence, but it will. I’ve seen it; my family has seen it; Harvard has seen it.

Bet your bottom dollar on the Ann Radcliffes of this world, my friends. They, like the other wacky dreamers dismissed by the mainstream as disrupters of the status quo, tend to win in the end.