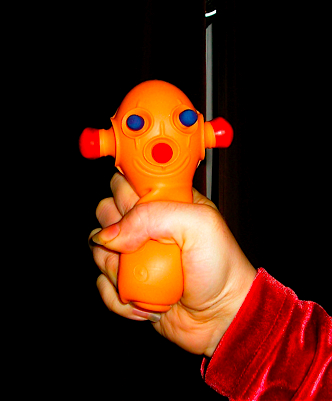 Welcome back to my series on developing that most essential of professional writer skills, taking critique well. As I’ve been explaining in various ways for the past week or so, the oh-so-common aspiring writer’s fantasy that a manuscript — any manuscript — will require no further changes once the author declares it finished is very much at odds with the way the path to publication is actually constructed. Many, many other parties have a right to stick in an oar and start rowing.

Contrary to the horror stories with which we writers like to scare one another around literary conference campfires — okay, around the bar that is never more than a hundred yards from any such conference — the overall result of outside feedback is generally GOOD for the book in question. Not every suggestion will be stellar, of course, but every manuscript in existence could use a second opinion.

Yes, I’m aware that last statement made half of you squirm. Nevertheless, it’s true.

After I completed yesterday’s post on what can happen when writers respond poorly to written feedback, I realized that logically, it would have made a dandy lead-in to the first strategy on this week’s list. I also realized that, due to a slight brain malfunction on my end, I neglected to mention why you might want to be preparing yourself for WRITTEN feedback in particular.

Most of the major decision-makers in the U.S. publishing industry are concentrated in a very few places in the country: New York, Los Angeles, to a lesser extent the San Francisco Bay Area, Chicago, and Minneapolis. Apart from a few scattered presses elsewhere, that’s about it.

Most of the writers whose books they produce do not live in one of these places.

As a result, the common aspiring writer expectation that signing with an agent or selling a book to an editor means copious in-person contact is seldom accurate. These days, communication between author and agent or editor is usually by e-mail, supplemented by telephone conversations.

In fact, it’s actually not unheard-of for an author never to meet her agent in the flesh at all.

Manuscript critique is still usually performed in the margins of the manuscript, with larger-scale requests conveyed via editorial memo or in the body of an e-mail. Obviously, then, most of the feedback a writer could expect to receive from her agent and editor, not to mention the publishing house’s marketing department, PR people, etc. would be in writing.

Before the shy among you breathe too great a sigh of relief at the prospect of being able to receive necessary change requests at an emotionally safe remove, cast your mind back over yesterday’s examples. Responding to written feedback is not necessarily easier than face-to-face; it merely requires a different set of coping mechanisms.

This is not to say that you should throw last week’s set of guidelines out the window the moment you receive an e-mailed critique; you shouldn’t. In many instances, those strategies will also be helpful for written feedback.

This week, however, I’m going to be tackling some of the more virulent knee-jerk responses to written critique, and giving you some tips on heading them off at the past.

Oh, I know: it’s tempting to tell off the agent who’s asked you to kill off your favorite secondary character or the editor that is apparently allergic to words of more than two syllables, but trust me on this one — it’s a waste of energy AND it won’t help preserve your artistic vision.

That last bit made some of you trouble heaven with your bootless cries, didn’t it? “In heaven’s name,” anguished voices moan, “why?”

Well, several reasons. First, as we discussed last week, generally speaking, feedback-givers offer critique with an eye to improving the book in question, not as the initial salvos in an ongoing debate. The critiqued writer may take the advice or leave it, but from the point of view of a reader concentrated on the quality of the end product, what’s said ABOUT the book doesn’t really matter, except insofar as it helps make the book better.

The important thing is what ends up on the PAGE.

The closer one’s manuscript gets to publication, the more likely this is to be the critiquer’s expectation — and, like so much else in this wacky industry, that’s partially a function of time. Agents and editors are busy, busy people, often working on rather short and overlapping deadlines: they don’t really have time to mince words. (That’s the official reason that professional feedback tends to be so terse, anyway.)

Because they feel rushed pretty much all the time, they tend to prefer to hand a list of suggested changes to the author and walk away, secure in the expectation that the writer will weigh each point carefully, make appropriate changes to the text, and return with a much-improved manuscript.

When a writer gives in to that initial urge to argue about the changes — and for those of you who have not yet experienced the receipt of professional-level feedback, the desire to respond can feel as imperative as a sneeze — a debate is inevitable. And debate, my friends, is a great eater of time.

This is not to say that you should not be willing to fight for the integrity of your work — you should. Later in this series, I shall talk at length about what to do if, upon mature consideration, a PARTICULAR piece of feedback seems impossible or inadvisable to incorporate.

In practice, however, writers who accede to the temptation to snipe back are seldom responding to a single questionable suggestion — they’re usually lashing back at the very notion of changing the book at all. Sound familiar?

Honestly, I’ve seen quite a few of these diatribes (usually when a sobbing author is seeking help in appeasing a much-offended agent or editor), and they tend to make it quite apparent that the writer is rejecting the proffered advice in toto. Generally, these missives are phrased in such a way as to render future compromise on the most important change requests significantly more difficult than if the author had just kept mum.

If your first impulse is to come up with 47 reasons that the suggested changes could never work, fine: write it all down. But don’t do it as an e-mail, and don’t send it to your critiquer.

Some of you out there just HATE this advice, don’t you? “But Anne,” I hear the rambunctious mutter, “you seem to expect us just to roll over and play dead.”

As a matter of fact, I don’t. What I DO expect you to do is be strategic in how you make your case, picking your battles, and proceeding in a way that protects the best interests of the book, not authorial ego — and certainly not in a manner that achieves nothing but venting at precisely the wrong people.

How might one go about this? The next tip is a good place to start.

Not to cast aspersions on anyone’s reading comprehension skills, but it’s been my experience that writers’ first reads of critique tend to be just a touch inaccurate. Completely understandable, of course: at first blush, it’s very, very easy to be angered by certain trigger words and phrases — and once the kettle of the brain is already boiling, it’s hard to consider further suggestions with anything remotely resembling detachment.

Read it once, then run off and punch a pillow. Repeatedly. Stomp. Scream. Christen the closest stuffed animal within reach with the name of your feedback giver and read it the riot act. Just do not, whatever you do, respond directly to the critiquer. (See rule #1.)

After you’ve had a chance to calm down — and whether that will take an hour, a week, or a month varies wildly from writer to writer — go back and print the critique. Read it again; you will probably be surprised at how many fewer changes it’s requesting than you initially thought.

Set it aside again, returning to it at a point of blessed calm, when you will not be interrupted. Go through the feedback line by line, making a list of what it is actually asking you to do. Then take the initial missive, fold it twice, and stash it away somewhere, safe from human eyes.

Or, if you’re still boiling, hand the list to a good reader whom you trust implicitly and as HIM to make out a list.

When you first approach the manuscript, have the list by your side, not the critique in its original form. (I know it sounds wacky, but seeing the change suggestions in one’s own handwriting often seems less threatening.) Read through the ENTIRE manuscript, noting on the list where the pages and chapters where the requested changes would be applied.

Note, please, that I have not yet said anything about deciding whether to APPLY the feedback or not. At this juncture, you’re merely gathering information. Be as impartial as you can.

Call it a fact-finding tour of the manuscript.

Those of you reading this while facing tight deadlines can probably feel your blood pressure rising at this juncture, can’t you? “But Anne,” I hear these stressed-out souls cry, “this will take FOREVER. I need to make these changes NOW, don’t I?”

Not necessarily — writers almost always underestimate how much time they have to respond to revision requests, assuming imminence simply because they haven’t asked point-blank for a due date. (Don’t worry, stress-mongers: I shall be discussing the ticklish business of deadline-setting later in the week.)

The simple fact is, though, that no matter how tight the actual deadline may be, a writer in the throes of critique shock is in no shape to make critical decisions affecting his manuscript. He needs to calm down first — and calming down takes time.

No, seriously. Ask a doctor: once the body is revved up, those weirded-out stress hormones don’t just vanish in a puff of smoke merely because the brain decides it has work to do.

If, after a week or two, you still aren’t calm enough to be able to approach the suggestions or your manuscript in a constructive frame of mind, consider asking a writer friend (other friends probably will have a hard time understanding the power dynamics between critiquer and reviser) to read over the feedback and summarize it for you.

Ideally, this would be someone who has already read the manuscript, but who isn’t, say, sharing your bed or workplace on a regular basis. Or who didn’t give birth to you. You want someone who cares about you, but who can be impartial when you cannot.

(Spoiler alert: once you’ve established a good working relationship with your agent, s/he is going to be a great person to ask for perspective when you receive upsetting critique from your editor. But part of setting up that rapport and trust involves the writer’s demonstrating a willingness to respond professionally to feedback.)

Why is finding an impartial second opinion important? Because — and I’m sticking this bug in your ear now, because you may not be able to feel it kicking around your brain immediately in the wake of receiving a raft of feedback — there’s probably some good advice lurking in that morass of critique. You wouldn’t want to reject it wholesale, would you?

Well, actually, in the first moment of receiving it, you almost certainly would. May I suggest that wouldn’t be the most appropriate instant to weigh the quality of the critique, let alone make career-shaking decisions?

More coping strategies follow next time, of course. Keep taking those nice, deep breaths — and keep up the good work!