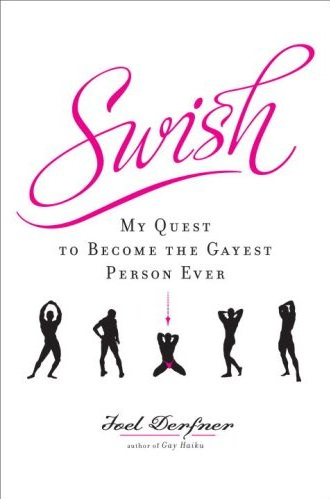 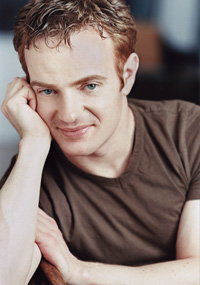 Another post on craft follows soon, of course, but I wanted to get the trumpets blowing as soon as possible: the ever-fabulous Joel Derfner, better known to those of us here at Author! Author! as the prolific commenter and blogger extraordinaire Faustus, M.D. has a hilarious memoir coming out today from Random House’s Broadway Books!

Congratulations, Dr. F! Please join me, everyone, in a great big round of applause.

If you live in or around New York, Joel will be reading TONIGHT at 7:30 pm at the Barnes & Noble at 396 Avenue of the Americas . (if you’re like me and rely upon the kindness of strangers to navigate the isle of Manhattan, tell the cabbie that you’d like to go to 6th Avenue and 8th Street.) I have it on pretty good authority that in addition to being a hilarious reader, he also bakes a mean brownie; there may be some baked goods in evidence.

SWISH (which may be purchased from today onward from Amazon, Powell’s, and other fine book emporia) is Joel’s second book, following hard upon the heels of the must-be-experienced-first-hand GAY HAIKU.

Take a gander at the publisher’s blurb for SWISH:

Joel Derfner is gayer than you.

Don’t feel too bad about it, though, because he has made being gayer than you his life’s work. At summer day camp, when he was six, Derfner tried to sign up for needlepoint and flower arranging, but the camp counselors wouldn’t let him, because, they said, those activities were for girls only. Derfner, just to be contrary, embarked that very day on a solemn and sacred quest: to become the gayest person ever. Along the way he has become a fierce knitter, an even fiercer musical theater composer, and so totally the fiercest step aerobics instructor (just ask him—he’ll tell you himself).

In SWISH, Derfner takes his readers on a flamboyant adventure along the glitter-strewn road from fabulous to divine. Whether he’s confronting the demons of his past at a GLBT summer camp, using the Internet to “meet” men—many, many men—or plunging headfirst (and nearly naked) into the shady world of go-go dancing, he reveals himself with every gayer-than-thou flourish to be not just a stylish explorer but also a fearless one. So fearless, in fact, that when he sneaks into a conference for people who want to cure themselves of their homosexuality, he turns the experience into one of the most fascinating, deeply moving chapters of the book. Derfner, like King Arthur, Christopher Columbus, and Indiana Jones—but with a better haircut and a much deeper commitment to fad diets—is a hero destined for legend.

Written with wicked humor and keen insight, Swish is at once a hilarious look at contemporary ideas about gay culture and a poignant exploration of identity that will speak to all readers—gay, straight, and in between.

I don’t generally review books here, but I am going to bend my own rules a little in this instance to recommend this book to any of you out there who aspire to write either comedy or memoir, as well as to those enamored of a good laugh. Rarely have I seen a memoirist’s personality emerge so charmingly on the printed page — or so honestly. Over and above Joel’s talent with an outrageous turn of phrase and genuine gift for humor (which is, alas, granted less often by the muse Thalia than those of us who like to read comedy might like), this is a darned fine piece of memoir writing.

So fair warning, Dr. F: I’m going to be blandishing you mercilessly for a guest post on the subject. After your book tour, of course.

In the meantime, I promised you a writing contest, didn’t I? And a contest you shall have. Quoth Joel:

In the introduction to SWISH, I explain that my quest to become the gayest person ever did not turn out to be an unqualified success—which means that the position of the Gayest Person Ever is still open. So I’m having a Gay-Off.

If you’re interested in competing, log onto my website and send me a brief explanation (up to 100 words) of why you should be crowned this year’s Gayest Person Ever. Note, please, that in order to enter you do not have to be gay or even, I suppose, a person. The Gayest Person Ever describes an existential state, irrespective of plumbing and flavor.

The last day to send in entries is Tuesday, June 10. On Friday the 13th, I’ll post the top five entries (as determined by an independent panel of judges) on my website, and from then through the end of Gay Pride (Sunday, June 29) you can vote for your favorite.

Good luck, and may the Gayest Person win!

See, I wasn’t kidding about the brownies. Should be a lot of fun — and it’s never a bad idea to run your work under the eyes of folks who already have agents, even if it’s just 100 words.

Congratulations, Dr. F, and please keep all of us here at Author! Author! posted on your book’s success!