All right, I’ll admit it: this isn’t actually a picture of me at a former birthday. Unlike so many dark-eyed adult brunettes, I never was a blonde-haired, blue-eyed mite with pigtails. Also, like other children with autumn birthdays growing up in wine country, my family was usually harvesting a few tons of something on or about my birthday, so my cake tended to be consumed at school, as cupcakes. Oh, and I have always looked terrible in pastels; even as a very small child, I wouldn’t be caught dead in ‘em.

Otherwise, I assure you, this picture is an uncannily accurate reproduction of an annual event in my past.

Yesterday (known to literature-lovers everywhere as Pre-Anne Eve, natch), I gave a few genteel indications of how a 5-page synopsis — still, whatever some writing-advice websites claim, the most common requested length for a novel synopsis — might conceivably differ from a 1-page synopsis.

To be specific, I alleged that the extended synopsis should give a solid feel of the mood of the book and a basic plot summary. Rather than attempting to cram an in-depth summary of every twist and turn of the book into just a few pages, I suggested that a savvy writer might content herself with showing who the major characters are, what the major conflicts between them are, and illustrating how they played out by describing a few scenes with a wealth of sensual detail.

(1) introduce the major characters and premise,

(3) show what’s at stake for the protagonist, and

(4) ideally, give some indication of the tone and voice of the book.

(5) show the primary story arc through BRIEF descriptions of the most important scenes. (For NF that isn’t story-based, present the planks of the overarching argument in logical order, along with some indication of how you intend to prove each point), and

(6) show how the plot’s primary conflict is resolved or what the result of adopting the book’s argument would be.

Let’s talk for a moment about #4, writing the synopsis in roughly the same voice and in the same tone as the novel it summarizes. As I’ve mentioned, a comic novel’s synopsis should contain a few chuckles; an ultra-serious one shouldn’t. A steamy romance’s synopsis should be at least a little bit sexy, a thriller’s a trifle scary, and so forth.

No need to get obsessed with making sure the tone is identical, of course — in the same ballpark will do. You just want to show that you are familiar with the type of writing expected in the type of novel you’ve written and can produce it consistently, even in a relatively dry document.

Why might an agent or editor want you to demonstrate the latter skill? Well, increasingly, authors are expected to promote their own books; it’s not at all uncommon these days for a publishing house to ask the author of a soon-to-be-released book to write a magazine or online article in the book’s voice, for promotional purposes, for instance.

Yes, I know; you want to concentrate on your writing, not its promotion. The muses love you for that impulse. But would you rather that I lied to you about the realities of being a working author?

What you should also not do — but, alas, all too many aspiring writers do — is attempt to replicate the voice of the book by lifting actual sentences from the novel itself. I know that you want to show off your best writing, but trust me, you’re going to want to make up some new verbiage here.

Why, you ask? Hint: people who go into the manuscript-reading business tend to have pretty good memories.

They recall what they’ve read.

See the problem, especially if — as not infrequently happens, especially with contest entries — the chapters containing the lifted verbiage and the synopsis are read back-to-back? A good 30% of contest synopses make this mistake, reproducing entire sentences or even entire paragraphs from the chapters included in the entry, invariably costing the entry originality points.

Do I see some raised hands from those of you who habitually recall what you’ve read? “But Anne,” I hear some of you pointing out, and who could blame you? “Didn’t you tell us just a couple of days ago that it was a grave error to assume that Millicent (the agency screener), Maury (her cousin who works as an editorial assistant), and/or Mehitabel (their aunt, the contest judge) will necessarily read both our synopses and the rest of our submissions?”

Excellent point, sharp-eyed readers. While it’s never safe to assume that EVERYONE who reads your synopsis will also read your opening chapter, it’s also not a very good idea to assume that NO ONE will. Shooting for a happy medium — including enough overlap that someone who read only one of them could follow the plot without indulging in phrase redundancy — tends to work best here.

Should you be tempted to repeat yourself, I implore you to ask this question with all possible speed: “Is there a vibrantly interesting detail that I could insert here instead?”

To over-writers (like, I must admit, myself), it may seem a trifle odd to suggest adding detail to a piece of writing as short as 5 pages, but actually, most synopses suffer from overgrowths of generalization and an insufficiency of specifics.

So once you have a solid draft, read it over and ask yourself: is what I have here honestly a reader-friendly telling of my story or a convincing presentation of my argument (don’t worry, NF writers: I’ll deal with your concerns at length next time), or is it merely a presentation of the premise of the book and a cursory overview of its major themes?

For most synopses, it is the latter.

Do I hear some questions over and above the wailing and gnashing of teeth out there? “But Anne,” a couple of voices crying from the wilderness, “How can I tell the difference between a necessary summary statement and a generalization?”

Here’s a useful trick: print up a hard copy of the synopsis, find yourself a highlighting pen, and mark every summary statement about character, every time you have wrapped up a scene or plot twist description with a sentence along the lines of and in the process, Sheila learns an important lesson about herself.

Go back through and take a careful look at these highlighted lines. Then ask yourself for each: would a briefly-described scene SHOW the conclusion stated there better than just TELLING the reader about it? Is there a telling character detail or an interesting plot nuance that might supplement these general statements, making them more interesting to read?

I heard that gasp of recognition out there — yes, campers, the all-pervasive directive to SHOW, DON’T TELL should be applied to synopses as well. Generally speaking, the fewer generalities you can use in a fiction synopsis, the better.

I’ll let those of you into brevity for brevity’s sake in on a little secret: given a choice, specifics are almost always more interesting to a reader than vague generalities. Think about it from an agency screener’s POV, someone who reads 800 synopses per week: wouldn’t general statements about lessons learned and hearts broken start to sound rather similar after awhile?

But a genuinely quirky detail in a particular synopsis — wouldn’t that stand out in your mind? And if that unique grabber appeared on page 1 of the synopsis, or even in the first couple of paragraphs, wouldn’t you pay more attention to the rest of the summary?

It’s very easy to forget in the heat of pulling together a synopsis that agency screeners are readers, too, not just decision-makers. They like to be entertained, so the more entertaining you can make your synopsis, the more likely Millicent is to be wowed by it. So are Maury and Mehitabel.

Isn’t it fortunate that you’re a writer with the skills to pull that off?

If your synopsis has the opposite problem and runs long, you should also sit down and read it over with a highlighter gripped tightly in your warm little hand. On your first pass through, mark any sentence that does not deal with the primary plot or argument of the book.

Then go back through and read the UNMARKED sentences in sequence, ignoring the highlighted ones. Ask yourself honestly: does the shorter version give an accurate impression of the book?

If so — take a deep breath here, please; some writers will find the rest of this paragraph upsetting — do the marked sentences really need to be there at all?

If your synopsis still runs too long, try this trick of the pros: minimize the amount of space you devote to the book’s premise and the actions that occur in Chapter 1; the vast majority of synopses spend to long on it. Here’s a startling statistic: in the average novel synopsis, over a quarter of the text deals with premise and character introduction.

Try trimming this down to just a few sentences and moving on to the rest of the plot.

If this seems to you like a dangerous strategy to embrace in what is, after all, a marketing document, think about it: if the agent or editor asked to see Chapter 1 or the first 50 pages, and if you place the chapter BEFORE the synopsis in your submission packet, the reader will already be familiar with both the initial premise AND the basic characters AND what occurs at the beginning in the book.

So why be repetitious?

Let me show you how this might play out in practice. Let’s continue this series’ tradition of pretending that you are Jane Austen, pitching SENSE AND SENSIBILITY to an agent at a conference. (Which I suspect would be a pretty tough sell in the current market, actually.)

Let’s further assume that you gave a solid, professional pitch, and the agent is charmed by the story. (Because, no doubt, you were very clever indeed, and did enough solid research before you signed up for your agent appointment to have a pretty fair certainty that this particular agent is habitually charmed by this sort of story.) The agent asks to see a synopsis and the first 50 pages.

Naturally, you dance home in a terrible rush to get those pages in the mail. As luck would have it, you already have a partially-written synopsis on your computer. In it, the first 50 pages’ worth of action look something like this: 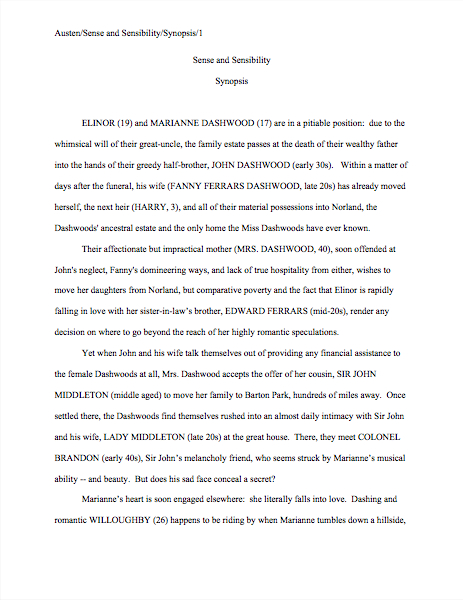 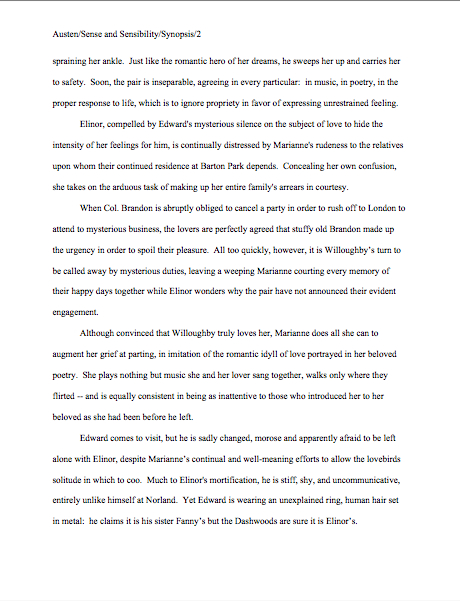 Now, all of this does in fact occur in the first 50 pages of SENSE AND SENSIBILITY, at least in my well-worn little paperback addition. However, all of the plot shown above would be in the materials the agent requested, right? Do you really need to spend 2 of your allotted 5 pages on this small a section of the plot, even if it is the set-up for what happens later on?

Of course not. Being a wise Aunt Jane, you would streamline this portion of your submission synopsis so it looked a bit more like this: 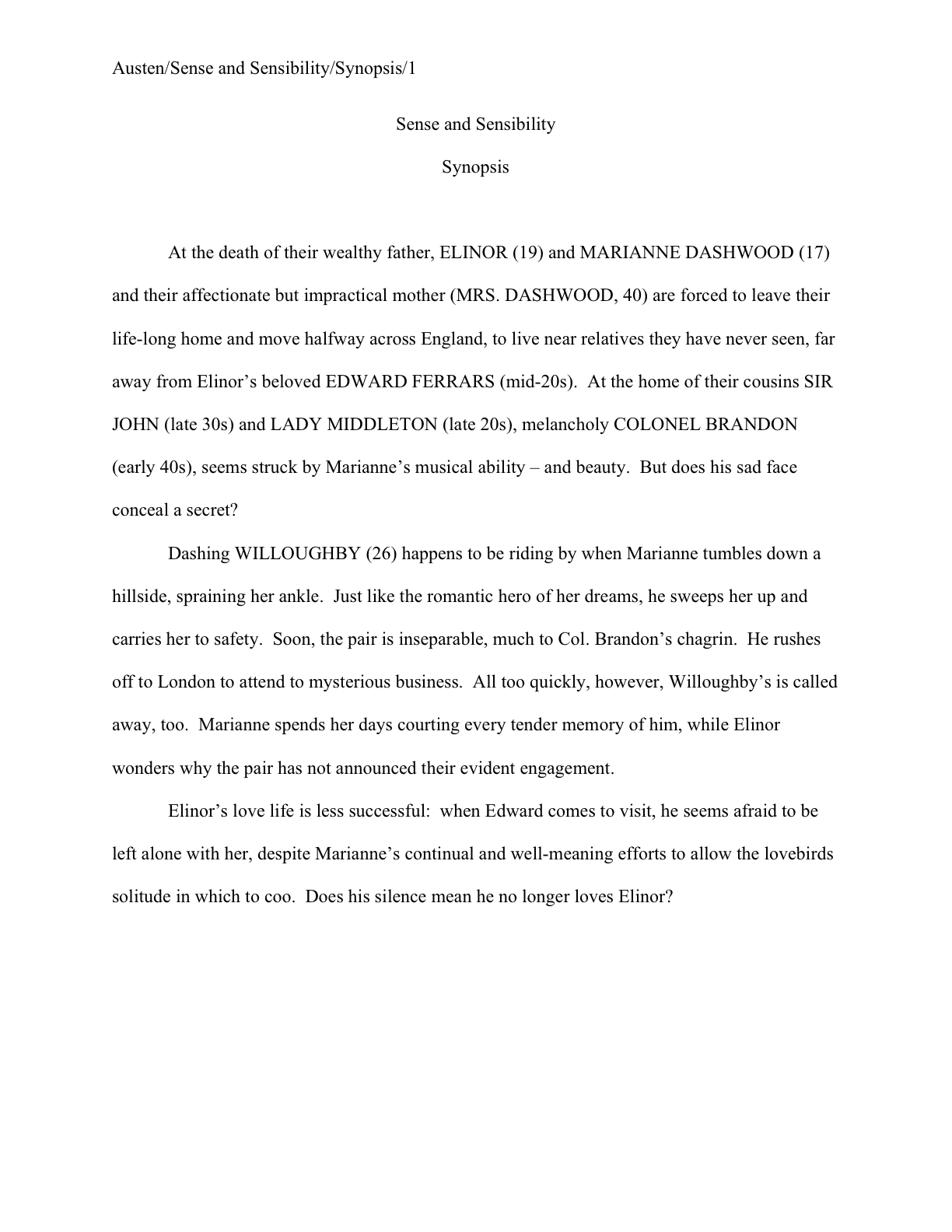 And then go on with the rest of the story, of course.

See what space-saving wonders may be wrought by cutting down on the premise-establishing facts? The second synopsis is less than half the length of the first, yet still shows enough detail to show the agent how the submitted 50 pp. feeds into the rest of the book. Well done, Jane!

While all of you novelists are hard at work, trying to perform a similar miracle upon your synopses, next time, I shall be tackling the specialized problems of the nonfiction synopsis. Yes, that’s right: we’re going to have our cake and eat it, too.

Oh, you didn’t honestly believe you’d make it through my birthday without being subjected to another bad cake pun, did you? Keep up the good work!