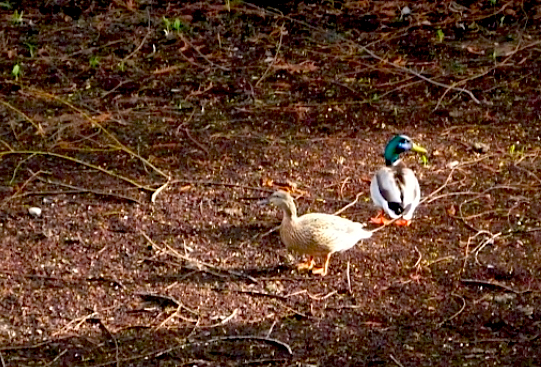 For the last week and a half, I’ve been discussing in general terms how books make it from manuscript to publication, but the fact is, every author’s experience is slightly different. As is every submitter’s, pitcher’s, and querier’s, to a certain extent. So now that I’ve brought the trajectory of the manuscript up to the point of an agent’s offering to represent it, this seems like a good time to ask those of you who have personal experience in these areas: how was (or is, if you’re still in the throes of any of these activities) different from the norm?

Specifically, what do you wish you had known before the first time you submitted — or even queried?

If those of you farther along the path to publication have any acquired wisdom to share, this would be the place to do it: as a comment in the midst of the series I hope that aspiring writers brand-new to the biz will read first. Go ahead, make the path a little easier for those who will trod it after you; generosity is fabulous for one’s karma.

To get the ball rolling, I shall begin: I wish I had known from the very beginning that having more than one agent reading a manuscript at a time is actually a very good thing for a writer. At least, if all of the agents concerned are aware that they’re in competition over the book.

Many years ago, I had just sent out a packet of requested materials when another agent asked to see my proposal as well. Naturally, when I sent off the second package, I mentioned in my cover letter that another agent was already considering the project. Unfortunately, the old conference-circuit advice about never calling an agent who hasn’t called you first was deeply engrained in my psyche; I was too afraid to bug her to let her know that someone else was looking at my book proposal.

Big mistake — if more than one agent asked to see my manuscript (or, in this particular case, my book proposal), I should have informed all of them, pronto, so they could adjust their reading schedules accordingly. Having stumbled into this rather common error, I set myself up for another, more sophisticated one.

A month later, Agent #2 called me to offer to take on the book. Since Agent #1 had at that point held onto the proposal for over six weeks without so much as a word, I assumed — wrongly, as it turned out — that she just wasn’t interested. So I accepted the only offer on the table, and sent Agent #1 a polite little missive thanking her for her time.

Two days later, the phone rang: an extremely irate Agent #1. Since she hadn’t realized that there was any competition over the project, she informed me loudly, she hadn’t known that she needed to read my submission quickly. But now that another agent wanted it, she had dug my materials out of the pile on her desk, zipped through them — and she wanted to represent it.

I was flattered, of course, but since I had already told her that I’d accepted another offer, I found her suggestion a trifle puzzling. Yet when I reminded her gently that I’d said yes to someone else, all she wanted to know was whether I had actually signed the contract. When I admitted that it was still in the mail, she immediately launched into a detailed explanation of what she wanted me to change in the proposal so she would be able to market it more easily.

Had I been too gentle in my refusal? What part of no didn’t she get? “I don’t think you quite understood me before,” I said as soon as she paused to draw breath; the woman must have been a tuba player in high school. “I’ve already committed to another agent.”

I’ll spare you the 15-minute argument that ensued; suffice it to say that she raked me over the coals for not having contacted her the nanosecond I received a request for materials. She also — and I found this both fascinating and confusing — used every argument she would invent to induce me to break my word to Agent #2 and sign with her instead.

As it turned out, I should have listened to her, because Agent #2, being relatively new to the book category, actually had very few connections for placing the book, something I might have learned had I asked him a few more questions before saying yes. So my initial mistake in not keeping both agents concerned equally well-informed allowed an agent who probably knew that acting quickly was his best chance of competing in a multiple submission situation to shut out a better-qualified agent by the simple expedient of asking first.

So what should I have done instead? Contacted Agent #1 as soon as I received the second request, of course — and called her before I gave Agent #2 an answer.

Admittedly, that second part would have required some guts and finesse to pull off — under the circumstances, I doubt that #2 would have been particularly thrilled about my asking for some time to make up my mind — but in the long run, it would have been far better for me and my book (which ultimately never sold) had I taken the time to make sure that I knew what my options were before I took what I deemed to be an irrevocable step. (For a more tips on handling simultaneous submissions far, far better than I did that first time around, please see the WHAT IF MORE THAN ONE AGENTS ASKS TO SEE MY MANUSCRIPT? category on the archive list at right.)

Fortunately, the next time I was lucky enough to be in this position, right after having won a major award for my memoir, I had the experience to know how to handle it. (I was also fortunate enough to know several previous winners of that particular contest who were kind enough to give me excellent advice on what to do if I won; it’s amazing how nice most authors are one-on-one.)

Okay, now I’ve ‘fessed up. Your turn: what do you wish you’d known sooner and why?

Oh, and keep up the good work!