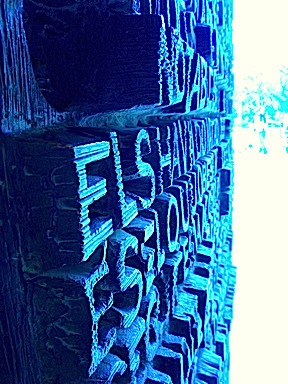 What? No Fats Waller fans out there?

I would bet a nickel that those of you who have been reading this blog for a year or more have been thinking for the last couple of weeks, My, but Anne revisits the topic of standard format frequently. She must really feel passionate about a properly put-together manuscript! And I hope that the more charitable among you at least considered adding mentally, Although that might not be an altogether common passion, I consistently find Anne’s rather peculiar taste in subject matter interesting/helpful/not very annoying yet.

I am passionate about it — as I am about any skill that helps good aspiring writers get their work the positive attention it deserves. Also, I don’t want any of you to feel that I didn’t prepare you properly for the First Periodic Author! Author! Awards for Expressive Excellence, a competition for which adherence to standard format is the sina qua non of success.

Not to nag you, but were you aware that the deadline is Monday, May 18 (at midnight wherever you are), and that there are fabulous prizes involved, not to mention undying glory and a semi-permanent place in my good graces? For another gander at the rules (or your first, if you haven’t yet begun to contemplate your entry), please click here.

And this time around, it’s somewhere pretty incredible: a tiny, magical artists’ space in a medieval village in the Montaigne Noir of southwestern France. Four writers, two painters, one nice dog, a whole lot of quiet — just what I need to plunge into a flurry of revision. So while you fine folks have been reading in daily installments about the joys of standard format and hearing weekly from guest posters, I have been wending my way up Spain’s Costa Brava on my way to the Langedoc.

I know — even I get jealous when I think about it.

So I’ll be signing off for the next few weeks. Best of luck on your submissions, and I’ll post again when I get back!

May I kid myself that at least a small handful of you believed that for a few consecutive seconds? Enough of you, say, to form an intramural softball league where the Credulous could pitch to the Easily Duped?

No? How about enough to play on a single team? Or to pull off a really good game of chess?

Okay, so my reputation for posting early, often, and long is evidently well-established. Besides, we still have some formatting business on our collective plate, a series on subtle censorship to pursue, and a contest to run here, people.

Not to mention the fact that I have scores of nifty pictures that I’m just dying to post. (That’s a side view of Gaudì’s cathedral door, in case you were wondering.)

I also have a sneaking suspicion that at least enough of you to form a truly sizzling mah johnng tournament are curious enough about how a hardcore, write-your-way-in artists’ retreat works that blogging about it while I’m actually here would be a worthwhile experiment. So in the weeks to come, I shall be talking about how a formal, intensive, artists colony-type retreat works, how to apply for such a thing (fellowships and/or work exchanges are often be available if one knows in advance that they exist), and how one prepares to go into hiding with one’s work, never fear.

Step one, in my case: hit up interesting authors to write guest posts. (We’ve got a lulu coming up on Friday, incidentally, so don’t forget to tune in this weekend to check it out.) Step two: spend a month revising posts on a well-beloved topic so I may post them later, while I’m on the road.

Because, let’s face it, I’m probably not going to be in the mood to think seriously about manuscript formatting just after staring at a street musician in Carcassonne reproduce Me and Bobby McGee phonetically, am I? (Freedom’s just another word for napping in Toulouse, apparently.)

Step three: steal a few spare moments whilst on the road to address some excellent questions from readers that honestly do deserve posts of their own — or, in this case, a shared post written while I was waiting in a train station in Figueres for an car rental clerk whose advertised 30-minute lunch break lasted a good two and a half hours.

So if what follows seems a trifle giddy at times, blame the train fumes and the concept of the siesta.

Instead of fuming, let’s turn our attention to a great formatting question inveterate commenter Dave posted some time back:

While I have your attention, it seems that some time ago you were going to mention something about manuscript format. To be exact, I think you were going to tell us how to format longer passages that a character is voicing or reading, those that in published form are often printed with wider margins, in italics, or even with a different font. As a more concrete example, I’m thinking of a letter the protagonist might receive that is presented to the reader in its entirety. To be direct, do you intend to post anything about that in the near future?

As I told Dave when he first asked this, sometime back in the Paleolithic era before I knew that I would be going on retreat, I did indeed intend to post something on the subject. In fact, I’ve been intending it for quite some time. (Hey, my to-blog list is of epic length — I get scads of provocative questions.) The time will never be riper than now, however, to address this particular question, because we’re already talking about formatting issues.

The short answer is, as it so often is in this game, it depends.

Upon what, you ask? Well, upon the length of the letter one wants to include, for one thing — but of that, more follows later. Also, if we want to get technical about it (and the masses cry, We do! We do!), it depends upon whether the manuscript in question is an academic work or not — or is a nonfiction work of the type often produced by academics.

Why on earth would it make a difference whether a professor — or someone else who aspired to that level of expertise — wrote the darned thing? Sure that you really want to know?

Okay, you asked for it: because a university press would expect any quotation longer than 3 lines of text to be offset, devoid of quotation marks, and single-spaced, PROVIDED that the quote in question is not longer than a page; quotes less than three full lines long are simply placed within quotation marks. Offsetting, for the benefit of those intrepid readers who did not automatically skip the rest of this paragraph immediately after the words university press, is achieved by skipping a line, then indenting the quoted material five spaces (or half an inch, in Word) on both the left and right margins. After the quote comes another blank line, then the text resumes normally.

In practice, then, a page featuring quotations in an academic manuscript might look a little something like this: 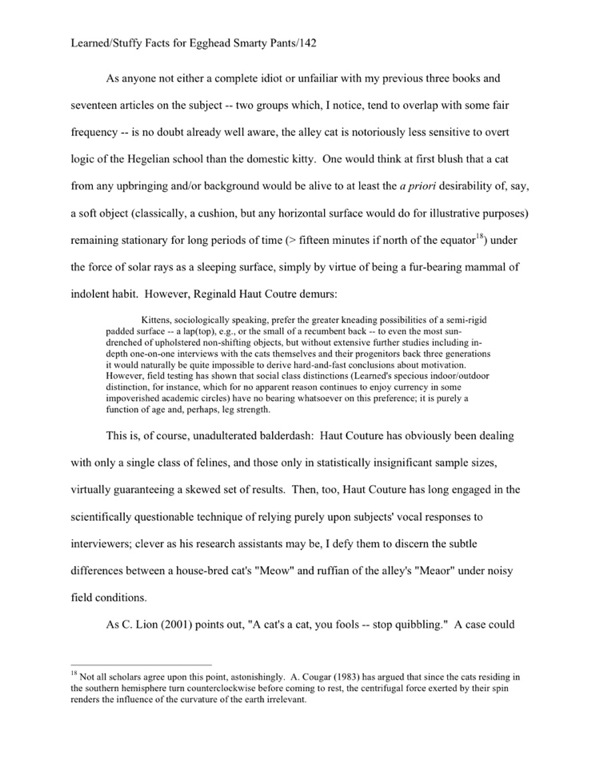 Why mark quotes from other works so VERY well? That way, there can be absolutely no question about when a professor is borrowing material from somebody else’s published or unpublished work. (There tends to be a lot of unpublished work floating around the average university.)

“That’s all very well and good,” enough of you to get together and raise a barn are probably muttering, “but this doesn’t really address Dave’s question, does it? Or are we to conclude that a letter in a novel manuscript should be treated like a quote one academic lifted from another and stuffed wholesale into her dissertation?

Not exactly — but again, it depends.

If the letter in question is short (or the excerpt being reproduced in the narrative is), there’s no need to treat it as anything BUT a quote: 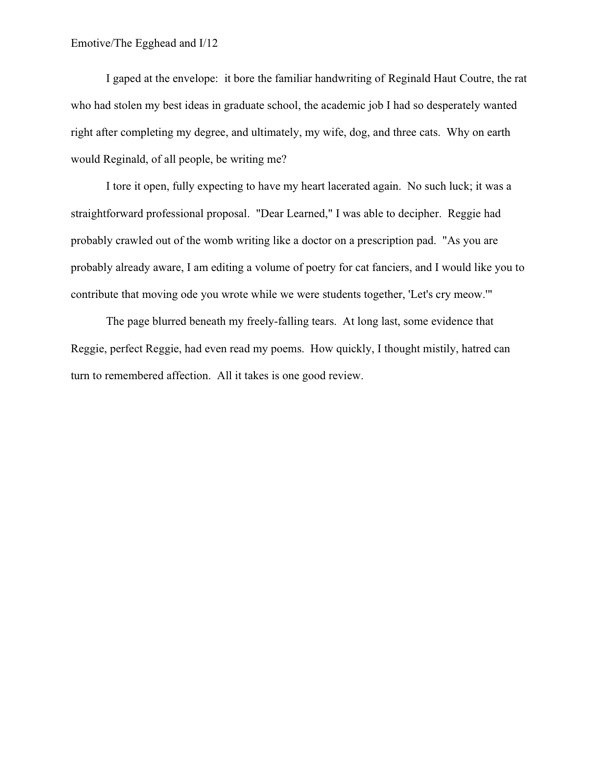 Some writers prefer to use italics for short letters (probably because, as Dave pointed out, they’ve seen them used that way in books), but frankly, I wouldn’t recommend it; it implies an ignorance of the fact that the editor, not the author, is ALWAYS the one who makes decisions about how text will appear in a published version. However, since some of you are undoubtedly not going to listen to me on this one, here is how to use italics properly in this context: 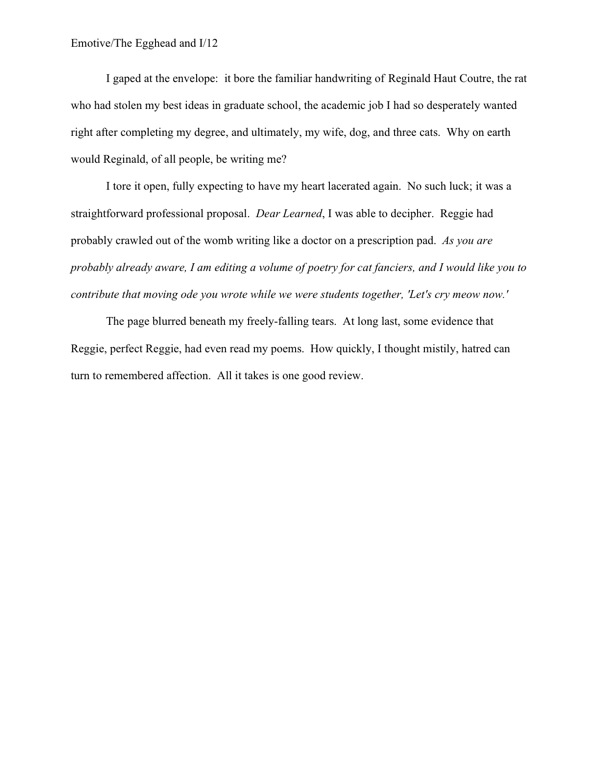 I sense some of you shaking your heads. “But Anne,” note-lovers everywhere cry in protest, “that doesn’t LOOK like a letter. I like a letter to look like a letter on the page; that’s part of its charm. So how do I convey that without seeming as though I’m usurping editorial authority?”

I had a feeling I would be hearing from you folks: there’s no shortage of writers who feel very strongly that every single syllable of every note passed between characters MUST be reproduced faithfully in the text, as if the reader had never seen a letter before and thus could not even begin to imagine what one might look like. Frankly, it’s seldom actually necessary to a plot to include the parts of a letter that would be hard to squeeze within the strictures of standard format: the letterhead, if any; the date; the salutation; the signature.

But you head-shakers are not convinced by that, are you? And I’m not going to be able to convince you that the 15-page letter starting on pg. 82 might work better simply broken off into its own chapter entitled The Letter, am I?

Okay, here are the two acceptable ways of formatting a letter like a letter in a manuscript — which, not entirely coincidentally, will also work beautifully for letters that go on for pages and pages. First, unsurprisingly, it may be presented like dialogue, within quotes: 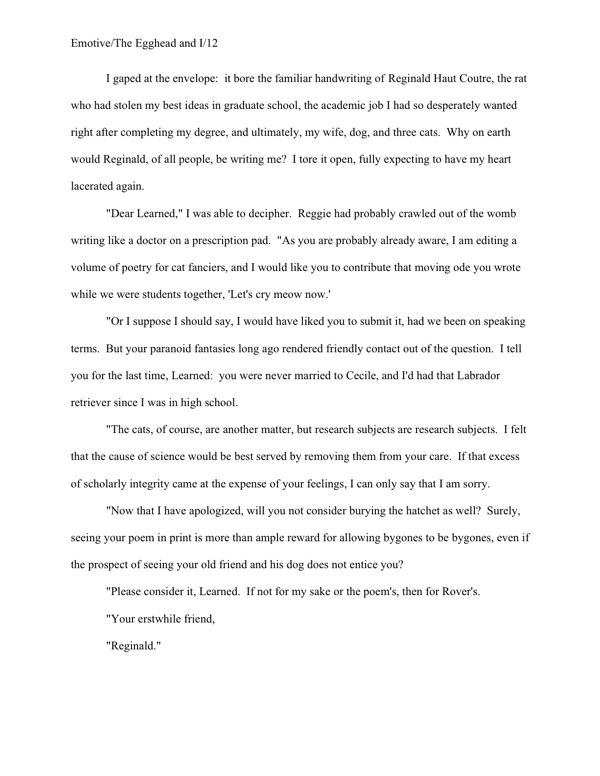 As with any other multi-paragraph quote, quotation marks do not appear at the end of a paragraph if the opening of the next paragraph is still part of the letter. They do, however, show up at the beginning of each paragraph within the letter, to alert the reader that this is not normal text.

The other option — and this will work with long quotes in nonfiction as well — is to offset the letter text, as one would with a long quote in an academic work. In a non-academic manuscript, however, the offset quote should be double-spaced, like the rest of the text: 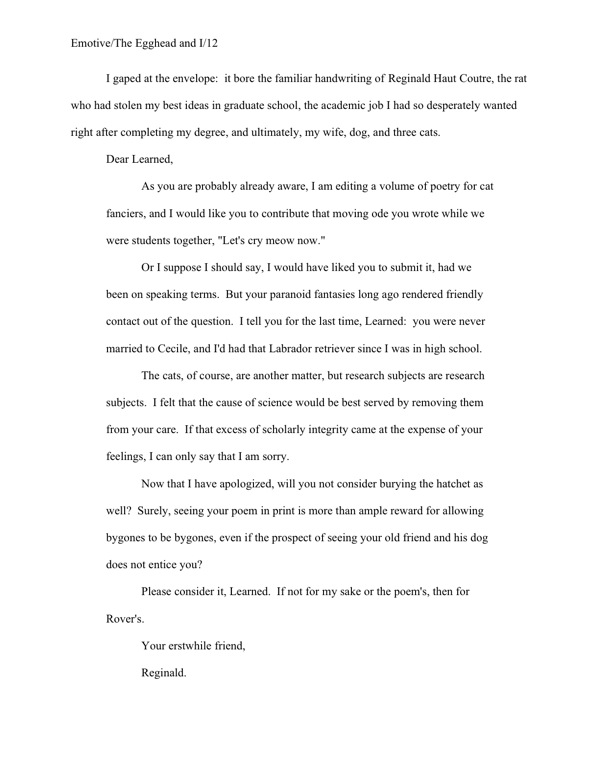 Although this last format does work well for long quotes, I’m not a huge fan for letters. Frankly, I don’t think it’s as distinctive, and there’s always the off chance that a rapidly-skimming reader (like, say, Millicent) might not realize that the salutation is the opening of an offset section.

But it’s really up to you. Do bear in mind, though, that the goal here is not to reproduce the letter exactly as it appeared in the story, or as you would like to see it in the published book — it’s to make it absolutely clear when the text is an excerpt from a letter and when it is not.

Like academic publishers, Millicents don’t like to leave such things open for interpretation. Don’t make her guess where a letter — or any other long quote — begins or ends.

The tardy car clerk did eventually return, you’ll be happy to hear, but she was not able to handle the necessary paperwork to exchange the faulty GPS system. Her supervisor, she said, would be able to handle that when he came back from lunch.

4 Replies to “How to format a book manuscript properly, part X: I’m gonna sit right down and write myself a letter/and make believe it came from you…”