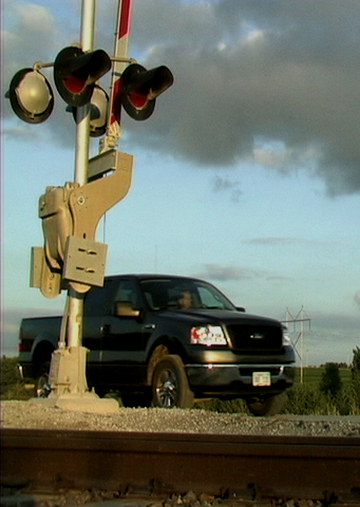 A railroad CEO conducts a sensitive business negotiation parked on a live railroad crossing in the Nebraska segment of We Pedal Uphill: Stories from the States, 2001-2008.

My writing retreat in France is drawing to a close, to coin a phrase — and yes, of course I’m going to tell you all about it, as well as giving you some tips on finding, applying for, and happily surviving a formal artists’ retreat. (None of which are the easiest things in the world, let me tell you.) So if you’ll kindly hold your proverbial horses for another few days, to permit me get back into my usual blogging rhythm, I’ll be overwhelming you with advice, insights, and low-level complaint about the writing life again soon.

In the meantime, I’m thrilled to introduce today’s guest in Author! Author!’s ongoing series on censorship, subtle and otherwise, film and stage director, writer, and all-around stupendous human being, Roland Tec. He’s also the founding editor of the performing arts blog Extra Criticum, as well as serving as Director of Membership for the Dramatists Guild of America.

He is a busy guy, in short.

Especially in the last six months, which saw the openings of both his most recent film as writer/director/actor, We Pedal Uphill, and his latest foray into producing, a film version of Nechama Tec’s, Defiance, directed by Edward Zwick. (While I’m at it, here’s a link to the book itself, Defiance: The Bielski Partisans. And if you’re even vaguely interested in World War II, Nechama Tec’s Resilience and Courage: Women, Men and the Holocaust is quite literally the most interesting book I’ve ever read on the subject — and considering that I used to teach a university course on the subject, I believe that’s saying something.)

To say that I’ve been attempting to blandish Roland into sharing his thoughts on writing with the Author! Author! community since I first began the blog would not be entirely accurate. If memory serves, I have been trying to drag him in front of groups of aspiring writers for years before that.

Why? Well, for one thing, he’s a heck of a good playwright and screenwriter. You don’t have to take my word for that, either: his play BODILY FUNCTION won an Edward Albee Award in 2000 and was an O’Neill finalist in 2001. The Los Angeles Times called his first feature film, All the Rage, “one of the sharpest, sexiest and most amusing satires of gay life and values ever filmed.”

But none of that is why I’ve asked him to speak to us today.

Throughout this periodic series, our various guests have discussed many means by which good writing (and good writers) are discouraged, dissuaded, and in some cases flatly banned from presenting their artistic visions to the world. Yet as those of you who have been hanging around Author! Author! for a while have no doubt already noticed, we talk a lot here about writing for a market.

Hmm, think the ever-changing demands of the market — real or perceived — affect who writes about what? Or whom agents decide to represent, and what kinds of books are published? And, in film, what kinds of stories the public is allowed to see?

Who better to enlighten us on the last, I ask rhetorically, than someone who has spent the last twenty years trying to stretch that particular envelope? None, I say.

So please join me in extending a great big Author! Author! welcome to film boundary-stretcher Roland Tec. Take it away, Roland!

Something creepy and disturbing is afoot in the world of moviemaking and unless we face up to it, I’m afraid we may all be doomed to a lifetime diet of nothing more than pre-packaged market-tested promotional dross in our movie theatres.

There is a system in place now that includes major studios, their distributors and big theatre chains who are behaving more and more as though they were corporate divisions of studios and less and less like independent players. This model has more or less been in place since moviemaking took off in the early part of the last century, but what’s new is the degree to which the big guys have an airtight lock on the distribution channels out there.

It’s a dirty little secret of the film business that in the past couple years, ticket sales at the multiplex have soared, breaking records year after year, while attendance at the art houses has been dwindling. In fact art house attendance is down this year by 60% from last year’s numbers. Why?

One of the reasons, I think, is because one of the old reliable tools used by independent filmmakers and their distributors for grabbing the attention of their audience has all but disappeared.

I’m referring, of course, to printed newspapers. As their advertising revenue has evaporated, so have their column inches, particularly when it comes to Arts coverage. Not a week goes by when one doesn’t read about this or that favorite critic being shown the door.

This is purely anecdotal, of course, but my own experience reveals a marked shrinkage in actual space devoted to independent films in the past ten years. I’m in a unique position to observe this, having produced and directed two feature films which were released theatrically almost exactly ten years apart.

My film, All the Rage, was released in 1999 and We Pedal Uphill, my tapestry of post-911 American fear, just came out this March. Both films were made for less than one million dollars. Both were topical, smart and featured performers not unknown to theatre aficionados but without typical Hollywood Box Office cred.

What’s striking is that if you lay the reviews side by side, the amount of space allotted has shrunk by slightly more than 50%. A simple word count of both New York Times reviews illustrates the decline quite clearly. In 1999, the Times review of my little film which opened on one small screen at one theatre in the Village ran 454 words in length. Ten years later, my little film opening on another small screen in the same neighborhood garnered a review half the size, at 216 words.

Now, I know this is totally unscientific, but it is striking. Isn’t it? What is astonishing, of course, is that in the weeks leading up to the release of We Pedal Uphill, a Hollywood film called I Love You, Man (which opened on the same day as mine) received not only a half-page review but a huge feature story.

The reason for this discrepancy? I Love You, Man took out several full-page ads in the paper while our little film could only manage one two-incher.

What is perhaps most troubling about the scenario I describe is that many of you reading it will simply shake your head and say, “Well, duh!” The assumption that money talks (and should) is now so deeply ingrained out culture that no one questions it. And to do so invites ridicule and pity.

Do we want to live in a society where the culture available to us is decided by a bunch of suits in an air-conditioned conference room overlooking the 101 Freeway? I know it may be hard for some of you younger readers to fathom this, but there really was a time when an independent film with two people just sitting around talking for two hours could play to empty houses for weeks until, slowly but surely, word of mouth spread and the thing became a phenomenon.

(It was called My Dinner with Andre and it eventually grossed a respectable sum at the box office).

If we’re content to live in a world where that can’t happen, I say, we’re doomed. Doomed to live in the Dark Ages in which our likes and dislikes are determined for us by a bunch of guys in suits. In Medieval Europe the suits were the lavish drag of the Catholic Church. Today the suits may look different, but the cultural serfdom is much the same.

Roland Tec is a writer, producer, composer and director. His film, All the Rage, released by Strand Releasing, was hailed as “one of the sharpest, sexiest and most amusing satires of gay life and values ever filmed” by the Los Angeles Times. The New York Times described his most recent picture, We Pedal Uphill, thusly: “Neither self-righteous nor bombastic, these wide-ranging mini-tales coast on a gently insistent tone of regret. Without pointing fingers or naming names, Mr. Tec reminds us that change does not happen overnight.”

Tec also served as a producer of Mira Nair’s Monsoon Wedding and Edward Zwick’s Defiance. He has also had several plays produced Off-Broadway including: Bodily Function, Gratuitous Nudity and The Wreck Behind Us. Roland is the founding editor of the group performing arts blog, Extra Criticum, and he currently serves as Director of Membership for the Dramatists Guild of America. For more info on his current projects, visit the Pinkplot website.