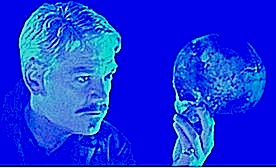 No, I haven’t been avoiding posting because I regretted my promise to construct 1-, 3-, and 5-page synopses for the same story in my next post. Oh, I may have had a few moments when I wondered why on earth I was doing such a thing to myself — and voluntarily, too — or when I was struck with the difficulty of coming up with a story sufficiently well-known to render such examples useful, yet not a recent bestseller, but the delay was for quite another reason, I assure you. I’ve been ill.

Actually, I still am, but I wanted to chase my recent series on synopsis-construction as quickly as possible with these examples. So contrary to my usual practice, I’m not going to dissect them immediately after they appear. Instead, I’m going to leave them to you to analyze — in the comments, if you like, or in the privacy of your own head.

You see, my purpose in posting these examples is not so much to show you what does and doesn’t work well in the dreaded synopsis format — we’ve just spent 13 posts going over that, right? — but to give you a sense of the scope of storytelling appropriate to each. Because deny it as some of you might, I still harbor the sneaking suspicion that there are a whole lot of aspiring writers out there who are mistakenly trying to cram the level of detail appropriate to a 5-page synopsis into a 3- or 1-page synopsis.

That way lies madness. Just don’t do it.

As I’ve pointed out repeatedly throughout this series, the goal of a 1-page synopsis is not the same as a longer one. No one who requests a single-page synopsis seriously expects to see the entire plot summarized in it, as is routinely expected in a 5-page synopsis.

What’s the difference? Glad you asked; read on.

A couple of things to know before you do: again, these are not intended to be the final synopses on this particular story; they’re quick-and-dirty stabs at it in a couple of hours on a sickbed. (Literally; I’m reclining on pillows as I write this. And yes, after you’ve been at it a while, tossing off three synopses in a couple of hours is not all that intimidating a task.)

So kindly spare me quibbles about how I could have improved these or made them conform more closely to the text. I already know that once or twice, I presented some of the events out of chronological order, for ease of storytelling.

But guess what? If Millicent asks to read your entire manuscript based upon your synopsis, she is not going to call you up to yell at you because they did not match up precisely. What’s important here is the story arc and that it comes across as a good story.

I am anticipating that many of you will know the story well enough to catch the rearrangement, by the way; this is a far more useful exercise if it’s a story with which you’re familiar. Besides, I wanted to stick with something in the public domain.

So you’re about to read three synopses of HAMLET.

Okay, so that’s a stereotype about literary fiction, but it’s a cliché for a reason. As any Millicent working in an agency that represents LF could tell you, far too many would-be LF writers mistakenly believe that the less that happens, the more literary the manuscript is. (To clear up some of the confusion on the subject: what differentiates LF from other fiction is usually the vocabulary and sentence structure choices; LF assumes a college-educated readership.)

The other reason to choose HAMLET is that while most of you have probably seen it at least once, I’m betting that very few of you have ever seen it performed live in its entirety. Even the most text-hugging of theatre companies usually cuts an hour or so out of the play. (The major exception, and the reason I used the photo above: Kenneth Branaugh’s film version does in fact contain every word.)

So I’m synopsizing a story that pretty much everybody has seen or heard synopsized, at least a little.

To head off whining at the pass: yes, the lettering here is rather small; that’s the nature of the format. If you’re having difficulty reading the typeface, double-click on the image so that it pops up in its own window. From there, you can enlarge it. Or you can download it to your hard drive.

But before anybody out there gets the bright idea to steal any of this and turn it in as a term paper, this is copyrighted material. So you wouldn’t just be cheating; you’d be breaking the law.

Here goes, then. Welcome to the 5-page version: 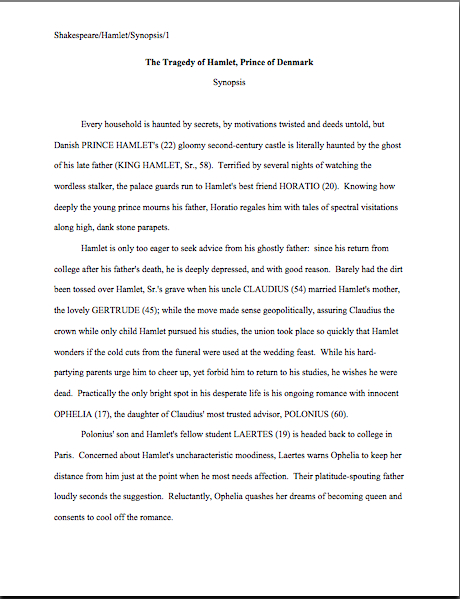 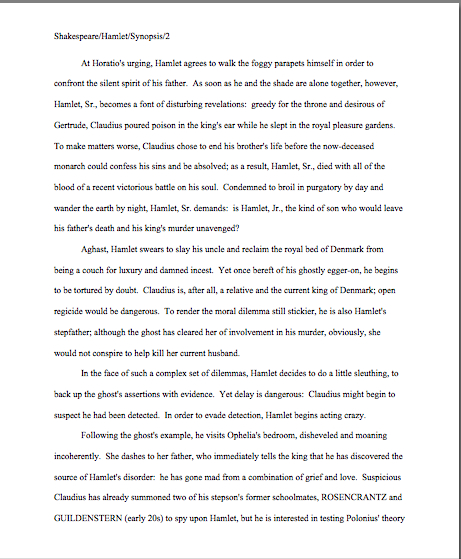 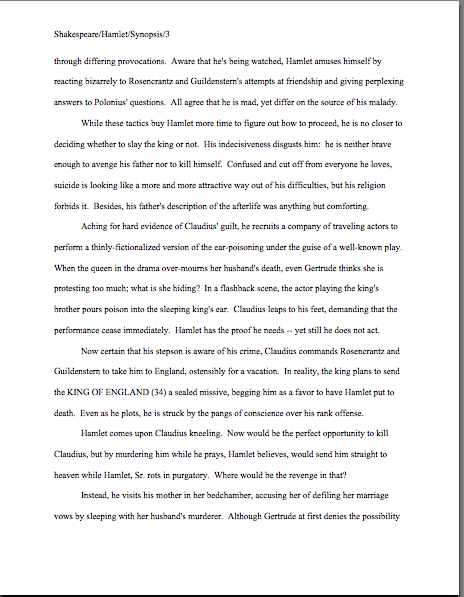 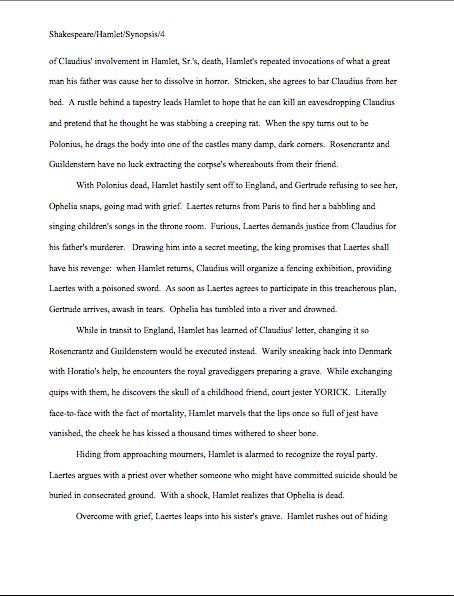 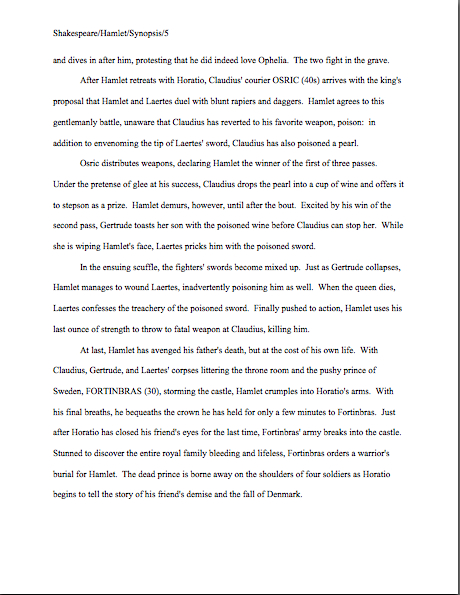 Okay, pop quiz: I’ve deliberately made a really, really common mistake here, to show you all just how easy it is not to notice. Anyone catch it?

If you immediately raised your hand and shouted, “You misspelled Yorick’s name!” give yourself a gold star. You wouldn’t BELIEVE how often writers misspell the names of their own characters in synopses.

And what’s the cure for that, everyone? Sing out loudly, please: read your synopsis IN HARD COPY, IN ITS ENTIRETY, and OUT LOUD.

The 5-page version has been, as I mentioned, the industry standard for many years. However, one is occasionally asked (by guidelines, by contest rules) to produce something shorter.

As I believe I have mentioned about 1700 times on the blog at this point, READ THE GUIDELINES BEFORE YOU SUBMIT. If the requester doesn’t specify, then the length is up to you.

Tell the entire story in a 3- or 4-page synopsis. If you already have a 5-page version handy, you can often get there by simply lightening the level of detail: 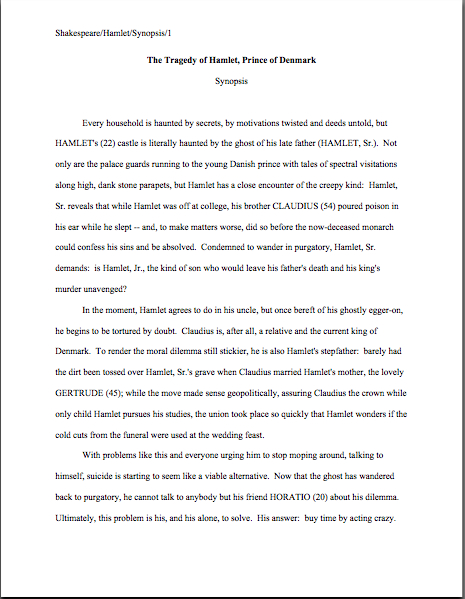 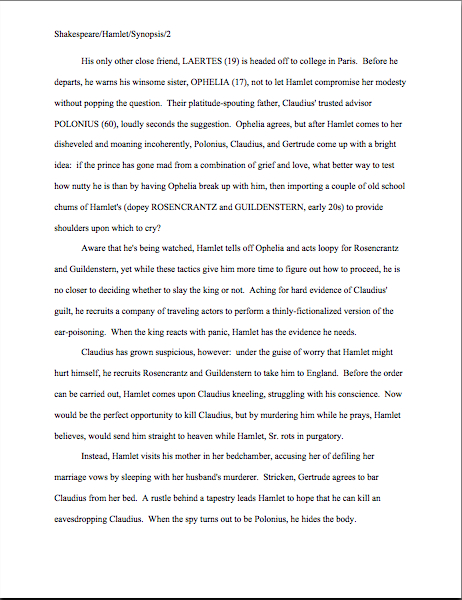 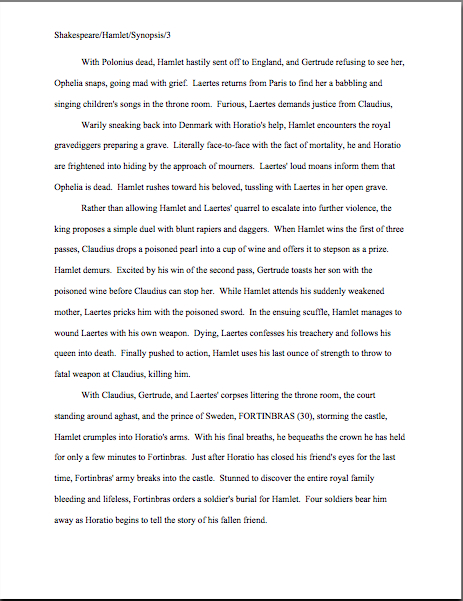 For a 1- or 2-page synopsis, the brief is different — if you don’t know how, go back and re-read the earlier posts in this series. Don’t even try to cut down a 5-page synopsis into a 1-page; it will only irritate you to the hair-yanking stage. 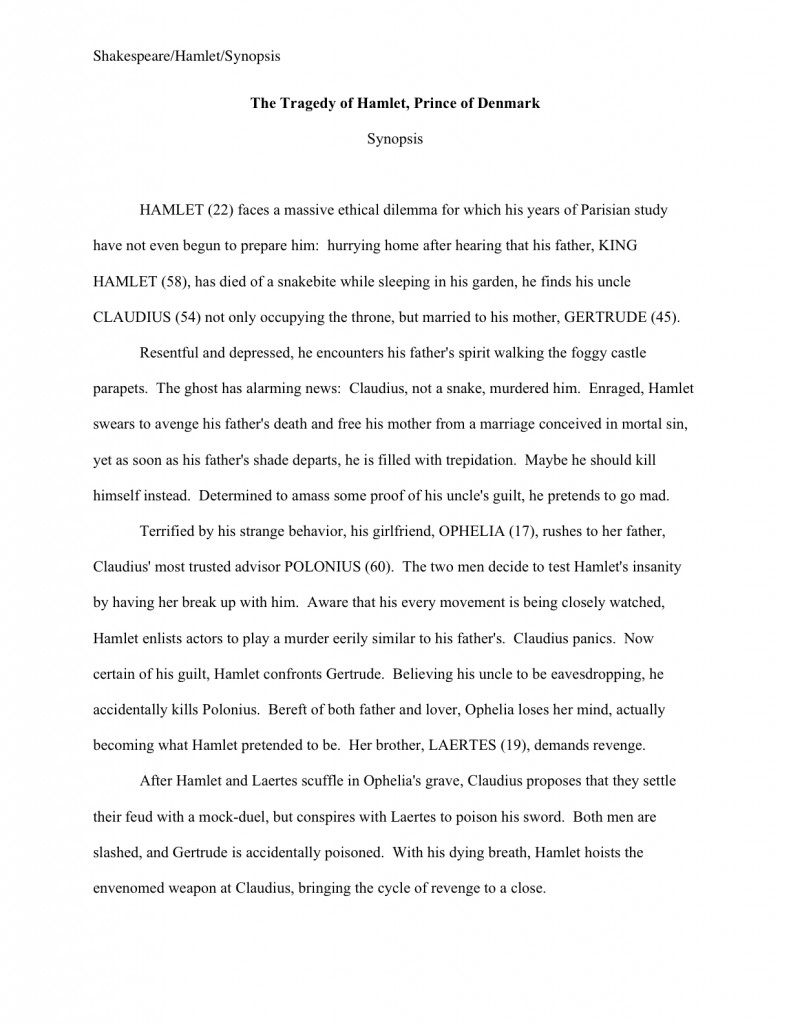 As you may see, I actually have covered the entire plot here, if a bit lightly. I’ve introduced the major characters and conflict — and no more. I didn’t waste a paragraph describing the castle; I didn’t feel compelled to show what the characters looked like; I avoided clichés about motivation. Yet I’ve demonstrated that this story is interesting and holds together.

In other words, I did my job, which was to write a 1-page overview of the plot.

If you’re still having trouble either seeing the difference between these three levels of detail and/or are having trouble translating from theory into practice, don’t start out trying to synopsize your own book. Pick a story you know very well and try writing these three versions of it.

If you’re not close to the story, it’s often easier to catch the essence. Repeat as often as necessary until you get the hang of it, then go back to your own opus.

Hey, it’s a learned skill. What makes you think you’ll be good at it without some practice?

Food for thought, anyway. Keep up the good work!