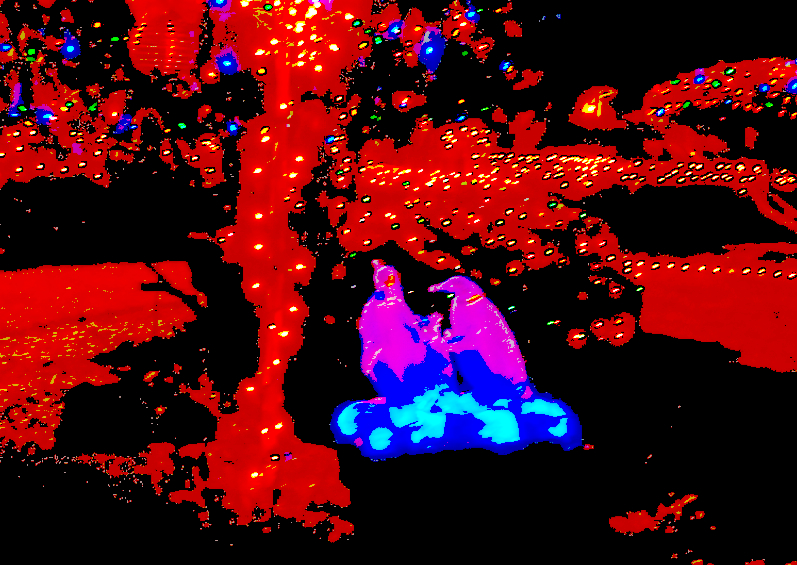 No, that’s not a computer-generated image of post-global warming penguin habitat; that’s what happens when your humble hostess’ hand slips while her mouse is on the brightness slider in iPhoto whilst playing with a picture she took of a neighbor’s holiday decorations. I rather like the result.

But let it be a reminder to us all: once an artist starts tinkering, the resulting revision may not end up looking very much like the original.

Sometimes, that’s all to the good. On a not entirely unrelated topic, last time, I waxed poetic on the subject of boredom.

Not your standard, garden-variety, oh-God-I-can’t-believe-there-are-still-forty-six-minutes-until-my-lunch-break ennui, but the more specific get ON with it! impatience that tends to infect agents, editors, and their screeners if a manuscript drags for more than, say, a quarter of a page at a stretch. Which is, as I’m sure has already occurred to you, an absurdly short amount of text upon which to base any judgment whatsoever. Yet as I pointed out in my last post, the standards by which the rest of the world, including that large segment of it that happens to read books, gauges boredom is not really applicable to your manuscript.

So an aspiring writer has a clear choice to make here: pace purely according to the needs of the story and one’s own personal internal metronome, or structure one’s book-length narratives, especially within their first few pages, with the expectation that they must pass muster even with a reader whose idea of a long wait for an elevator involves just enough time to remove her finger from the call button.

Not certain which route is for you? Here’s a small hint of the direction I would like to see you choose: your submissions will ultimately be more successful if you edit them with an eye to the industry-specific tolerance for slowness.

Did I just hear a groan of disbelief out there? “Wait just an agent-boring minute,” some of you who favor slower pacing exclaim indignantly, “I can’t open three books at my corner bookstore without finding pages upon pages of slow build-up. I’ve read award-winning novels where positively nothing happened until p. 42 — and even then, it was subtle. So there must be agents and editors out there who appreciate slower work. I just need to find them, right?”

Right, with caveats: such agents and editors do exist within the continental United States — but their numbers are hardly legion. Just how rare are they, you ask? You know that overworked metaphor about finding a needle in a haystack? Picture an entire barn, stuffed to the rafters with hay and a single needle.

Still enthused about hunting for it?

Don’t believe me? Fine. But if your pacing tends to be on the slow side, I cannot urge you strongly enough to run, not walk, back to the bookstore where you found those gently-paced domestically-produced books in your book category and take another gander at them. I’d bet an hour of hay-searching that they all exhibit at least one of the following characteristics:

(1)The book in question is not the author’s first published book.

(2) The book in question was not written by an author who is still living.

(3) The book in question was first published outside the United States.

Not so fast; I wasn’t done with my list of conditions. Shall I venture a guess that the book in your hand is either

(5) not published within the last ten years,

(7) represented by an agent who picked up the author more than ten years ago.

Scratching your heads, wondering how I knew? Let me take these factors one by one, reserving the most common for last.

Wildly different standards of pacing used to be applied to books (points 1, 2, 5, and 7), because the readers at whom new books were aimed had quite a bit more time on their hands than they do now, when their hands are full of Blackberries and iPhones.

Remember, until the 1990 census, the MAJORITY of Americans did not live in cities. How were you gonna keep ’em down on the farm without a good book?

Now, the publishing industry aims very squarely for city- and suburb-dwellers. Commute readers, for instance, and the fine folks who listen to books-on-tape in their cars. These people have less time to read than, well, pretty much any other human beings in the whole of recorded history, as well as more stimuli to distract them, so agents and editors are now looking for books that will keep the interest of people who read in shorter bursts.

At least, US publishers have swung in the direction of tighter pacing. In other countries (point 3), different standards prevail. Why, in the U.K., many pros consider it downright stylish for nothing to happen for the first 50 pages, a pace that would make anyone in a Manhattan-based agency reject it by page 4 at the latest.

Of course, self-publishing authors (6) need not concern themselves with prevailing pacing norms in the traditional published market. Yet since it’s SIGNIFICANTLY harder for author-financed books to gain shelf space at brick-and-mortar bookstores these days — most of the big chains, like most libraries, have traditionally-published books only policies — you might not encounter any at all in your bookstore crawl.

One also encounters slower pacing — and more uneven pacing in general — in nonfiction books (4), especially memoirs. This is often true even if the author is as American as apple pie, his agency as New York-oriented as Woody Allen, and his publisher as market-minded as, well, an NYC-based publisher. So why the tolerance for a slower NF pace?

Simple: nonfiction is not generally sold on the entire book; it’s sold on a single chapter and a book proposal. Thus, the agent and acquiring editor commit to the project before they have seen the final work. This allows slower-paced books to slip through the system.

Which brings me to the first on my list (and the last in most aspiring writers’ hearts), the comparatively lax pacing standards applied to new books by authors who already have a recognized fan base. Established writers have leeway of which the aspiring can only dream.

To be specific, the kind of dream where one rends one’s garments and goes on frustrated rampages of minor destruction through some symbolically-relevant dreamscape. The torrid penguin hell above, perhaps?

As I am surely not the first to point out, the more famous the writer, the less likely his editor is to stand up to him and insist upon edits. This is why successful authors’ books tend to get longer and longer over the course of their careers: they have too much clout to need to listen to the opinions of others anymore.

I’m looking at you, Stephen King. Although I am continually recommending your book on craft and keeping the faith to those new to the game.

A writer seeking an agent and publisher for a first book, particularly a novel, virtually never enjoys this level of power, unless she happens already to be a celebrity in another field. Indeed, at the submission stage, the aspiring writer typically does not have any clout at all, which is why I think it is so important for writers’ associations to keep an eye on how their members are treated. (At a good conference, for instance, the organizers will want to know IMMEDIATELY if any of the attending agents or editors is gratuitously mean during a pitch meeting. Seriously, tell them.)

Since the first-time writer needs to get her submission past the most impatient reader of all, the agency screener, she doesn’t have the luxury of all of those extra lines, pages, and chapters. The pacing needs to be tight.

How tight? Well, let’s just that only first-time authors ever hear that tedious speech about how expensive paper, ink, and binding have become.

Here’s some more bad news: the pacing bar has definitely risen in recent years, rendering most of the books currently taking up shelf space at the local megastore are not a particularly good guide to pacing for first-time novelists. Five years ago, the industry truism used to be that a good manuscript should have conflict on every single page — not a bad rule of thumb to bear in mind, incidentally, while you are self-editing. Now, the expectation is seldom verbalized, but agents, editors, and their screeners routinely stop reading if they are bored for even a few lines.

Particularly, as we saw in the HOW NOT TO WRITE A FIRST PAGE series earlier this year (conveniently preserved under the category of the same name on the archive list at right) if those few lines happen to lie the first page of the submission. Bearing that in mind, here are a couple of sensible questions for any self-editor to ask himself at the end of every paragraph — and to ask the trusted first readers to whom I sincerely hope each and every one of is are showing your work BEFORE submitting it to the pros to flag:

At any point in the preceding paragraph, has my attention wandered? Did I ever lose interest for more than, say, ten seconds?

Such questions are not a mark of authorial insecurity — the willingness to ask them is an indicator that an aspiring writer is being very practical about the demands of the publishing world now, rather than ten years ago. Or a century ago. Or in the U.K.

Hey, professional readers scan those pages closely; most Millicents are simply too overwhelmed with submissions say to themselves, “Well, I’m bored now, but maybe the pace will pick up in a page or two.” Don’t test her patience.

Now that I’ve thoroughly depressed you, I’m going to sign off for today; my last couple of posts have been, I’m told, a trifle long to wedge into the schedules of last-minute holiday shoppers. So I’m going to show that I can take my own advice and know when my writing should take up less space.

May the season be bright — and keep up the good work!