Didn’t expect me back so soon, did you, campers? Here’s this morning’s second installment in our ongoing trilogy of concrete examples of 1-page synopses. In this version, we’re talking about different stripes of nonfiction. Enjoy!

So far in this weekend’s expedited Synopsispalooza series — or, as they’ve been calling it chez Mini, “your insanely time-consuming weekend of synopsis examples” — we have taken a gander at 1-, 2-, 3-, and 5-page synopses for a novel and 1-, 3-, and 5-page synopses for a memoir. This morning, as promised, I shall be showing you several different versions — and different types of platform — for a nonfiction book. Or rather, to keep the examples interesting, for several different kinds of nonfiction book.

Why mix it up more this time than in the previous posts? Well, there are quite a few kinds of nonfiction book: what might work beautifully in a synopsis for, say, a journal’s account of a sensational murder case might not present a historical analysis of the same case nearly as well.

Don’t believe me? Okay, let’s return to our by-now-familiar example and compare how a synopsis for a true crime version of Hamlet by a writer with a journalistic background would differ from how a historian would present his case for a book on the Elsinore murders. Beginning with the journalist: 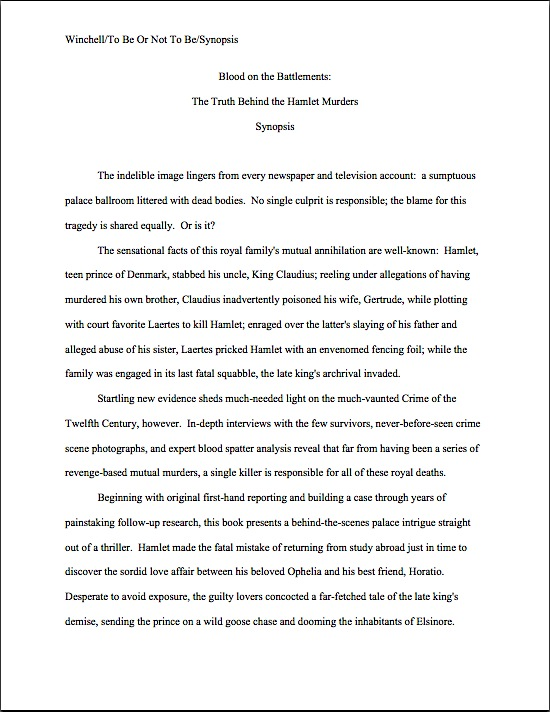 Ace journalist Walter Winchell certainly makes the his take on the well-worn Hamlet story sound like a grabber, doesn’t he? A fresh take on a demonstrably popular subject is always popular with Millicent the agency screener. Wisely, Mssr. Winchell also makes it quite plain what kind of evidence he has to offer in support of his challenge to the prevailing wisdom on the subject.

(1) present the problem or question the book will address in a way that makes it seem fascinating even to those not intimately familiar with the subject matter;

(2) demonstrate why readers should care enough about the problem or question to want to read about it;

(3) mention who specifically is already interested in this problem or question, to demonstrate already-existing public interest in the subject, if applicable;

(4) give some indication of how the writer intends to prove the case, showing the argument in some detail;

(5) demonstrate why the book will appeal to a large enough market niche to make publishing it worthwhile, and

(6) show beyond any reasonable question that you are the best-qualified person in the universe to write the book.

Actually, those are the goals of a longer synopsis — say, 3-5 pages — but Mssr. Winchell has managed to hit most of these points in a single page. (Well done, Walt!) Fringe benefit: since he has embraced our earlier premise that a good nonfiction synopsis is a miniaturized book proposal, all he would need to do in order to lengthen this 1-page wonder into a longer synopsis, should he need one, would be to add more specifics and beef up his credentials as the obvious person to break this exciting story.

Let’s take a peek at a synopsis for straightforward historical account of the famous murders. To make the task a trifle more challenging, let’s remove the conceit of present-day headline value. 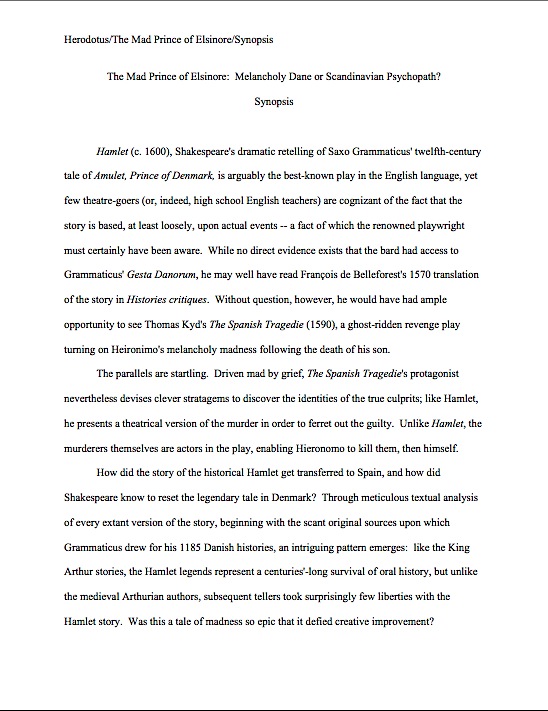 Doesn’t sound as though it has nearly as large a target audience as the first version, does it? That’s not necessarily a drawback in a nonfiction synopsis, by the way: in this case, it’s simply an accurate reflection of the book’s probable appeal. The Mad Prince of Denmark is not, after all, likely to be a natural for Oprah.

Appropriately, then, everything in this synopsis is geared to the readers most likely to be interested in this book: the academic tone, the intensive level of proof in the argument, the largely theoretical stakes all proclaim a college-educated audience. Yes, college-educated readers interested in tracing the historical and literary background of centuries-old plays is a niche market, but as any Millicent working at a history-representing agency would be aware, it’s a readership that buys a heck of a lot of books. No reason for Herodotus to risk compromising his credibility, then, by claiming the potential audience implied in — wait for it — “It’s a natural for Oprah!”

I bring this up advisedly: all too frequently, nonfiction writers turn Millicent off by pretending (or even just implying) on the query or synopsis page that their target audiences are much, much larger than they actually are. This is a strategic mistake, one that’s likely to get a synopsis rejected on sight.

Seriously, agents who habitually sell manuscripts in your book category have a very clear sense of how big the general audience for that type of book is. While including demographic statistics for the specific target market for the specific subject matter of your tome is a good idea — as we discussed earlier in this series, Millicent may not be aware of just how many drive-in movie enthusiasts are out there; if your book happens to be about drive-in theatres, you might want to mention the size of the Drive-in Fan Club — exaggerated general claims are extremely unlikely to convince a professional reader that your book is marketable.

So kudos to Herodotus for being savvy enough not to claim that every English teacher in America will rush to buy this book!. Instead, he stuck with the much more believable assertion that pretty much anyone who stumbled upon his volume in a bookstore would be at least vaguely familiar with the story of HAMLET.

Hmm, where have I heard that supposition before?

Yes, readers who have had their hands in the air since the top of the second example? “But Anne,” the sharp-eyed point out, “the formatting of the title is different for these two synopses. In the first, the subtitle has its own dedicated double-spaced line, but in the second, both title and subtitle are on the first line of the page. What gives?”

Well caught, patient hand-raisers. Either version is correct in a nonfiction synopsis. Generally speaking, longer subtitles tend to have their own lines, but unless either the title or subtitle is so long that it would be impossible to contain both on a single line, the choice is up to the writer.

Refreshing for something to be, isn’t it?

Oh, and you know how I keep urging all of you to read every syllable of your synopses IN THEIR ENTIRETY, IN HARD COPY, and OUT LOUD, rather than merely relying upon your word processing program’s spell- and grammar-checker, and to double-check that all proper names are spelled correctly? That last example provides an excellent reason to follow this advice religiously: because I was tired, I didn’t notice until after I posted the original version of this synopsis that Word’s spellchecker had changed Gesta Danorum to — I kid you not — Gestapo Decorum.

Which, while it would be a great title for a history about manners during the Second World War, was not what I meant. Thank goodness I did a dramatic reading of all of today’s examples at the brunch table, eh?

Just for fun, let’s take a peek at how a psychologist might synopsize the same basic story. Note how cleverly Dr. Welby works in his credentials. 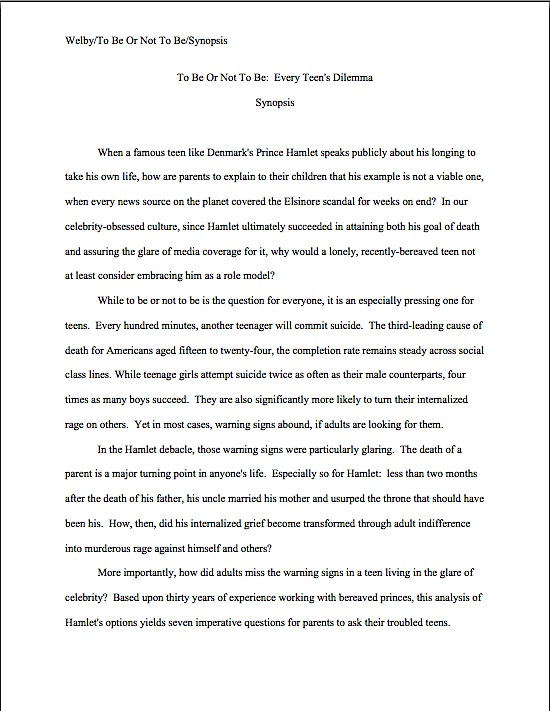 It’s fascinating how different these three takes on the same story are, isn’t it? From Millicent’s perspective, although they all draw on the same source material, each makes a beeline for its own book category.

And that’s how it should be. Signing off for now…

Still more hands just shot into the air, didn’t they? “But Anne,” those of you who believe that I don’t have anything else to do this weekend point out, “for both the novel and memoir synopses, you showed not just a 1-page version, but 3- and 5-page renditions as well. So where are the extensions of these, huh? Huh?”

Well, first, you might want to do something about that aggression you have going there; perhaps Dr. Welby’s self-help book could offer a few suggestions. I’m aware that there’s a common Internet-based assumption that every answer to any given searcher’s question should be instantly available on a single webpage — or, in this case, a single blog post — but as is so often the case, complex reality isn’t easily compressible into just a few hundred words.

That’s particularly true in this case — and for reasons that should be apparent to anyone in the throes of constructing a book proposal. While, as I mentioned above, expanding any of these 1-page synopses could be achieved by the simple expedients of beefing up the writer’s platform, adding statistics to back up claims about the target readership and the book’s importance to that readership (although Dr. Welby has already done an excellent job of demonstrating both), and telling more of Hamlet’s story as it relates to their respective arguments, my blowing up the first two of these useful text-bolsterers in order to fill the larger space allotment would involve my just making up background for the authors.

Fictional platform does not carry much example value, in my experience. Nor do made-up statistics, although since I did some actual research to construct the examples above, much of the content of the second and third examples is true. (Don’t quote it in your term papers, though, children: do your own archive-diving.) So while it would be amusing to expand these three examples — especially the first — the exercise probably would not help all of you nonfiction synopsis-writers a great deal. Sorry about that, truth-tellers.

In this evening’s post, I shall be tackling the ever-burning issue of how to write a synopsis for a multiple-protagonist novel. Keep up the good work!

2 Replies to “Countdown to a contest entry, part 8.5: just what went on in that castle, anyway? Inquiring minds want to know.”