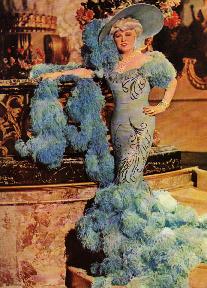 Today’s quote and picture have the same source, of course: Mae West, playwright of note, your hostess for today — and, harkening back to yesterday, an actress who certainly did her best work when she was writing her own material.

Why Mae, you ask? Well, while the sentiment above may not be the best guide to ethical living (and it would be darned hard to walk in that dress, so I wouldn’t emulate it, either), it’s not a bad motto for any artist aspiring to originality.

And true originality, contrary to what you might have heard on the writers’ conference grapevine, is one of the best selling points a manuscript — or a contest entry — can have.

Admittedly, this may seem like rather strange advice to those of you who have spent conference season after conference season being told endlessly by agents and editors that they are looking for books like this or that bestseller, but honestly, copycat books usually don’t sell all that well.

Witness how quickly all of those chick lit take-offs on BRIDGET JONES’ DIARY fell off agents’ hot lists, for instance. And just how many reworkings of THE DA VINCI CODE do you think the average agent saw immediately after it hit the bestseller list?

As Mae West liked to say, there are a lot of copies out there, but if you’re an original, no one can mistake you for someone else. No one remembers the copies.

Don’t believe me? Okay, name three books patterned after COLD MOUNTAIN. Or SEX IN THE CITY. Or, if you want to go farther back in time, CATCH-22.

I thought not. And there’s a pretty good reason for that: agents, editors, and yes, contest judges tend to get most excited by fresh concepts, not tired ones.

You’re all familiar with what the publishing world means by the term fresh, right? To borrow a page from my writer’s glossary:

FRESH, adj.: Industry term for an unusual look at a well-worn topic; marketable. The industry truism is that they’re always looking for an author who is fresh, but not weird. (Weird can mean anything from a topic never written about before to an unpopular political spin to a book proposal in a non-standard folder.)

Fresh is not a synonym for original, precisely, but a marriage of originality and proven marketability, a new spin on something they already know that they can sell. This is why, in case you were wondering, agents and editors so often say things at conferences like, “I wish aspiring writers would pay attention to what’s on the bestseller list.”

They don’t mean that they’re looking for replicas of what’s to be found there — or rather, they don’t mean that if they’re savvy. What they want is a book for which they know there is an already-existing audience (thus the reference to the bestseller list) that is DIFFERENT from anything else that’s out there.

Sound tautological? Not necessarily. But given how small a window of opportunity a book has to grab an agent or editor’s attention during a query letter or pitch, broad freshness (“It’s JAWS set in a kindergarten class!”) tends to have an easier time catching the industry’s eye than more complex storylines.

In a contest entry, however, you do have a bit more leeway: if the writing is good, a judge is more likely to give an entry the benefit of the doubt. You also have more wiggle room with both judges and Millicents alike if your book happens to be funny — and not just because actually humorous writing is genuinely rare.

With comedy, a writer can get away being downright original, because of the nature of the exercise: spontaneous laughs are, after all, often produced by surprising the reader.

Which is precisely why, as I have mentioned before, a successful comic entry should do everything it can to avoid being predictable. Trust me, there is absolutely nothing more predictable in a contest entry — or a contemporary novel, or a memoir — than humorous references to the current zeitgeist.

And isn’t that a coincidence? Last time, I suggested that one of the best ways to endear your contest entry to a judge may be to go through it carefully, excising as much of the humor based upon current pop culture references as humanly possible. Don’t worry that it will make your work seem less hip: since it takes so long for the average manuscript to hit the shelves, even if a reference is brand-new, chances are that it will no longer be current by the time the book comes out.

There’s a term for this in the industry: dated. And another: not fresh.

I hear some dissention out there, don’t I? “But Anne,” I hear some of you pointing out, “there are plenty of books published every year that are up-to-the-minute topical and/or hip. I can understand where they might not age very well, but isn’t the point of a contest entry or submission to wow the judge or Millicent NOW? After all, I could always change the pop culture references just before the book went to press, couldn’t I?”

That’s kind of a clever way to look at it, faceless theorizers, but that’s not really the way a contest judge tends to think. They want to reward books that are going to be on the shelves for a while.

And frankly, they’re perfectly aware that books-of-the-moment don’t tend to be perennial sellers. Which, in case you were not aware of it, is the way that most authors who make a living at it earn their bread and butter: not by selling millions of copies of one book in a given year, but by selling thousands of copies of several different books.

Bestsellers are the exception — thus the comparison inherent in the name — and have always been. And, if you’ll forgive my saying so, there are factors other than quality of writing that can lead to a book’s being a runaway hit.

Scandal, for instance. The writer’s already being a celebrity. Being endorsed by a celebrity. Being written by a very well-known author. A great publicity campaign. A publishing house that really believes in the book and is willing to put a great deal of time and money into promoting it.

Yes, it would be nice to think that any well-written book would receive the benefit of the latter, but realistically, the vast majority released in any given year by U.S. publishing houses are allocated less than $2,000 in promotion. (Yes, you read that correctly. I’ve been to small launch parties where the wine cost more than that.)

So while your garden-variety contest judge would most likely be thrilled if an entry she sent on to the finals ended up on the bestseller list, she’s not really expecting it. No, she wants to recognize a good book that stands a decent chance of getting published, even of winning further awards.

My, you’re antsy today, readers; could it be that you’re trying to get a contest entry out the door? “But Anne,” some of you cry, “while this is undoubtedly interesting, I’m up against a deadline. Today is not the day I’m worried about originality; I’m concentrated on making my work funny. You had mentioned something a couple of posts ago about a few tests I can apply to my writing?”

Ah, but there’s been a method to my madness: most of the tests I’m going to pass along touch on BOTH the originality and the humor level of the manuscript. These tests will highlight mistakes that should set off warning bells while you are revising — because, believe me, they will be setting off hazard flares in the minds of agents, editors, and contest judges.

But going through all of the tests (not to mention what to do if any part of your entry runs afoul of them) is going to take up quite a bit of blog space, so I shall be delving into that tomorrow. In the meantime, give some thought to whether anything in your entry could have been written by any sentient being in the universe other than you.

I’m quite serious about that, you know. Most aspiring writers take a number of years — or even a couple of books — to discover their own individual literary voices. The voices of the authors we admire tend to creep into our work without our realizing it.

And that’s just not good, either for comedy in general or comic contest entries in particular. Contrary to the oft-repeated truism, only conscious imitation could possibly be construed as anything remotely approaching flattery — and even then, I’m inclined to think the debt should be attributed openly.

I’m not going to give you an exercise for this — it’s up to every writer’s conscience to draw the line between being inspired by another artist’s work and lifting from it. The line is almost always pretty fuzzy.

But if you find instances in your entries or manuscripts where it isn’t, you might want to take those parts back to the revision board. Any given contest judge may have read and admired the same author you have, after all. Chances are, if it’s a living writer of any repute, a fairly hefty proportion of your target audience will have, too.

You want to win fame and fortune for YOUR literary voice and YOUR trenchant observations upon the human condition, don’t you?

The moral of the day: people still remember Mae West, my friends, not her hundreds of imitators. Here’s to all of us being originals on the page — and keeping up the good work!

PS: did anyone but me catch that big ol’ typo on the titles of the main network pre-Oscars red carpet show? It was a prime example of the kind of editing mistake one is likely to make when editing on a computer screen — and a problem that no spell-checker in the world would ever catch: it referred to the Oscar’s, not the Oscars.