As you may quickly figure out from the rather disconnected nature of this week’s posts, I’m traipsing about the country at the moment. (Hey, you try being coherent in an airport when it’s 101 degrees.) Fortuitously, FAAB (Friend of Author! Author! blog) Joel Derfner has volunteered to give me a day off by writing a guest blog. Thank you, Joel!

Even if you are not normally the writing contest entry type — although placing in a contest like this would make for some intriguing ECQLC (Eye-Catching Query Letter Candy, in case you missed my late posts on the subject) — the point Joel makes here about the kind of entries short-short literary contests tend to receive is INCREDIBLY good to know. So you might just learn something before he’s done today.

And what’s better than that?

Oh, and his second book, Swish: My Quest to Became the Gayest Person Ever is available on Amazon, or for those of you who prefer to deal with independent bookstores, Powell’s.

The lovely Anne mentioned a few weeks ago that, in conjunction with the publication of my new book Swish: My Quest to Became the Gayest Person Ever, I am sponsoring a gay-off. To enter, you need but send me an e-mail of 100 words or fewer about why you should be given the title of the Gayest Person Ever. Note that, to enter, you don’t have to be gay—in fact, some of the better entries I’ve gotten so far have been from straight people. The deadline for entry is the end of this Thursday, June 12.

In case anybody here is interested in participating, I’m going to give you some inside information, which is this: I think lists are boring.

Not invariably, of course. There are many situations in which a list can be very interesting: people your current boyfriend used to date that he’s still in touch with, people you have to kill because they’ve discovered you’re stealing office supplies, sexual favors you’re willing to offer the right movie star.

But I’ll say that a number of the entries I’ve gotten for this contest have been lists (along the lines of “I’m the gayest person ever because I did this as a child, and that, and then when I was a teenager I loved such-and-such and I wanted to be thus-and-so”), and even though some of the individual items on the lists are pretty great, in general I’ve found the lists difficult to get excited about.

I find myself hungering for narrative. Like, I want 100 words telling the story of one particular incident; I want depth over breadth. If you tell me that you 1) baked soufflé at age six in your E-Z Bake Oven, 2) performed a Dixie Carter monologue from Designing Women at show-and-tell, and 3) had your first crush ever on Miss Piggy, that’s certainly a lot of fun. But all it allows me to see is an approximation of a character, put together from chunky blocks.

Whereas if you tell me in detail about performing the Dixie Carter monologue, and what you were wearing, and what your teacher’s name was, and what her reaction was, and what your best friend’s reaction was, and the mean girl’s, and the class loser, and what you’d had for breakfast that morning—that paints me a very, very specific picture of a unique character at a unique moment—but one feeling emotions I have felt and can identify with. And maybe it wasn’t a Dixie Carter monologue in my childhood; maybe it was an Oscar Wilde poem. And maybe it wasn’t show-and-tell; maybe it was at Hebrew school. Or maybe it was Langston Hughes at the dinner table. But I can guarantee you that at some point in my life I have been in the same situation you’re describing. The particulars are all different, but it doesn’t matter because the emotional truth is exactly the same. I can see myself in who you’re describing.

I didn’t understand that this was what I wanted until I started getting things that weren’t this. Even if I had understood, I might not have realized that the invitation didn’t make this clear. I suspect that both of these things happen all the time in fledgling writing competitions. Next time (if there is a next time) I’ll be careful to word the invitation more specifically.

I’m only judging the semi-finals, and I’m not even doing that alone—my vote is one of several. Visitors to my website will vote to determine the winner. But the other judges will be people whose writing I admire, which means that they’ll probably like the same things I like.

So if anybody wants to send me an anecdote about why s/he should be crowned this year’s Gayest Person Ever, please, please do. The stakes are very low—the most exciting part of the prizes is homemade brownies—so there’s really very little risk.

Because I don’t know how many more lists I can take. 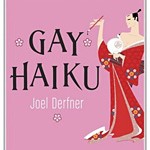