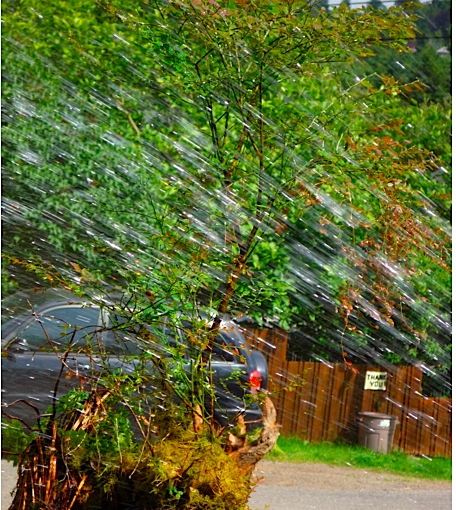 I’m still a bit under the weather, I’m afraid, but I wanted to post something today, to kick off our week of talking about query letters with, if not a bang, at least not with silence. In that spirit, I am re-running a pertinent post from last year below.

In the meantime, bright and generous reader Memoirista has been kind enough to post as a comment some formatting advice for those of you who were stunned to discover that standard format calls for two spaces after a period or colon, instead of just one. She’s figured out a way to effect this change throughout an entire manuscript in just a few easy steps; I suspect many of you out there will find it useful. Thanks for being so public-spirited, Memoirista!

And now return with me to that most tortured of topics, the construction of a winning query letter. Lest I confuse anyone, let me state up front that there is no connection between the picture above and the post below. I just happened to be struck by something the landscaper was doing. (And yes, they’re STILL here. Or, rather, are here again after having vanished like Houdini for weeks at a time, in that mysterious manner so dear to the hearts of all those in the throes of home improvement.)

In my last post, I set out a very basic structure for a query letter, using the skills and tools that we’ve been working on all summer during the Book Marketing 101 series (for those of you who missed it, please see the appropriately-named category on the list at right). I had fully expected to post a follow-up the next day, assuaging the fears of the nervous, adding nuances to the prototype, and generally spreading joy and enlightenment abroad.

Then there was a HUGE racing event at a certain track located more or less exactly halfway between my mother’s current home and the town where I grew up. So basically, I spent Saturday zigzagging all over Northern California, trying to get from one to the other without sitting for hours in racing-enthusiast traffic, to get to a minor class reunion.

I say minor, because it was not commemorating one of those nice, round year markers that professional event-organizers keep insisting that we all should celebrate like clockwork. (Or like calendar-work, even.) We’re two years from one of those, and frankly, the guy voted Most Likely to Succeed had to give the crowd a passionate pep talk on Saturday night to generate any enthusiasm at all about the next.

Which is funny, because I’m from the Napa Valley, and we tend to hold our reunions in wineries. As we did our prom, our jazz choir fundraisers, our Girl Scout cookie sales…you get the picture. Not the kind of places that one typically needs to use much blandishment to cajole people to visit.

It’s not that we’re averse to seeing one another — actually, it’s a pretty nice group of people, on the whole; the halfback who used to tease the small and the meek (speaking of clichés that turn up all the time in fiction…oh, wait, weren’t we talking about those?) was going around apologizing to people, even. It’s that going from kindergarten all the way through high school with the same 111 people (and I went to nursery school with 40 of them) can get a MITE claustrophobic in a town where the primary activities for teens are watching grapes grow (in answer to the question urbanites’ minds just shouted: slowly) and trying not to be run over by tourists who have over-sampled at the wineries.

I’m fairly confident that I set some sort of land-speed record when I left at 17.

I dreaded going to the reunion, but how could I stay away? One of the organizers, my best buddy during those dark days of Browniedom when our troop leader had what I suspect was a well-earned nervous breakdown — compounded, no doubt, by both the minor coup that we girls staged one day when we simply refused to cut up yet another set of aluminum cans to make decorative Christmas ornaments for the indigent elderly at the county home while little Roseanne ravished us with selections from her new accordion primer, and the dramatic reenactment of the troop leader’s hysterics that we staged for our parents’ benefit shortly thereafter (not my best writing, certainly, but it got the point across, and isn’t this a long sentence? Henry James would be so pleased) — ruthlessly described her 8-year-old daughter’s school year in precisely the same classroom where we had spent the third grade.

She continued in this vein until I threw my hands over my eyes and cried, “Enough! I’ll go!”

Once I got there, I was genuinely glad she’d blandished me. Because, of course, while pretty much everyone hated high school — since those who didn’t tend not to become writers, I feel fairly confident about making such a sweeping generalization here — it’s kind of hard to hold a grudge against the kid who spilled hot chocolate on you in the second grade much past your mid-thirties, isn’t it? And while reunion-goers tend to dread running into old nemeses and look forward to greeting old friends, it’s the folks one hasn’t thought about in a decade or two who often present the most delightful surprises.

All of which is to say: despite some pretty dangerous-sounding pre-reunion rumblings, Most Likely to Succeed was neither tarred nor feathered, run out of town on a rail, nor burned in effigy. No one was mean to anyone else; no one cried, and everyone seemed to have a pretty good time.

What does all this have to do with querying, you ask? Plenty.

(You thought I was just rambling about my weekend? Au contraire, mes braves.)

Querying, I think we can all agree, is a necessary evil: no one likes it; it generates a whole lot of inconvenience for writer and agency alike, and to engage in it is to put one’s ego on the line in a very fundamental way. Rejection hurts, and you can’t be rejected if you never send out your work, right? So you can either try to lie low, keeping your dreams to yourself, or you can attempt to approach those high-and-mighty gatekeepers of the industry, asking to be let inside the Emerald City.

Just as many people stay away from reunions because they fear exposing themselves to the judgment of people whom past experience has led them to believe to be, well, kinda shallow and hurtful, many, many writers avoid querying, or give up after just a handful of queries, because they fear to be rejected by folks they have heard are kinda shallow and prone to be hurtful.

There are a variety of ways to deal with such fears. One could, for instance, not query at all, and resign oneself to that great novel or brilliant NF book’s never being published. One could query just a couple of times, then give up.

Or — and if you haven’t guessed by now, this would be my preferred option — you could recognize that while some of the people at the reunion may in fact turn out to be kind of unpleasant, you really only need to find the one delightful person who finds you truly fascinating to make the entire enterprise worthwhile.

You’ll be pleased to hear, though, that unlike gearing up to attend a reunion, there are certain things you can do before querying to increase the probability of a positive reception. Certain elements mark a query letter as coming from a writer who has taken the time to learn how the industry works.

The structure I proposed last time — which is, I assure you, NOT the only one possible by any means, or even the only one that works; it’s just what has worked best in my experience — also frees the writer from the well-nigh impossible task of trying to cram everything good about a book into a single page.

Which is, I have noticed over the years, precisely what most aspiring writers tend to try to do.

No wonder they get intimidated and frustrated long before they query the 50 or 100 agents (yes, you read that correctly) it often takes these days for a good book to find the right fit. To put this in perspective, a truly talented writer might well end up querying the equivalent of my entire high school class before being signed.

It’s no reflection on the book; it’s just the way the industry works. The only way that I know to speed up that process is to make the query letter itself businesslike, but personable.

Do keep in mind that the SOLE purpose of the query is to engender enough excitement in the reader that she will ask to see a representative chunk of the book itself, not to reproduce what you would like to see on the book’s back jacket or to complain about having to work through an agent at all.

If either of the last two options made you chuckle in disbelief, good. Believe it or not, I’ve seen both turn up many, many times in unsuccessful query letters. Boasting and petulance both abound, and both tend to discourage positive response.

Now, I know that my readers are too savvy to do this deliberately, but isn’t it worth sitting down with your query letter and asking yourself: could an exhausted agency screener like Millicent — in a bad mood, with a cold, having just broken up with her boyfriend AND burned her lip on that over-hot latte again — possibly construe that letter as either?

Yes, querying is a chore, and an intimidating one at that; yes, ultimately it will be the agent’s job, not yours, to market your work to publishers, and an agent or editor probably would have a far better idea of how to spin your book than you would.

Agents and their screeners (it is rare for agents at the larger agencies to screen query letters themselves; thus Millicent) are in fact aware of all of these things. You don’t need to tell them.

Your query letter needs to market your book impeccably anyway, in a tone that makes you sound like an author who LOVES his work and is eager to give agent and editor alike huge amounts of his time to promote it.

As I said: not a walk in the park, definitely, but certainly doable by a smart, talented writer who approaches it in the right spirit. Sound like anyone you know?

I shall overwhelm you with tips and tricks of the trade tomorrow, I promise. But for now, start thinking, please, about how to make your query the one that waltzes into the reunion with a positive attitude, not the one who storms in with a chip on its little shoulder, gunning for Mr. Most Likely to Succeed. Or, heaven forefend, the one that doesn’t stick its nose through the door at all.

One Reply to “A few more thoughts on boilerplate query letters”