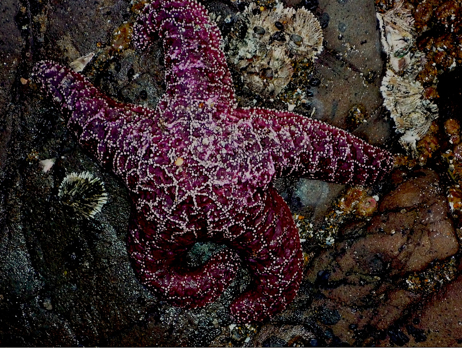 Fair warning, campers: I’m not going to be posting again until the 25th or so. Sometimes, the only way to work through a knotty section of novel is to lock oneself up with it for days and days on end in some undisclosed location.

Why in an undisclosed location? So one’s loving kith, kin, clients, neighbors, and everyone else who keeps telephoning one at home cannot track one down to say, “I know you’re busy writing, but I just had to ask you…” My set of kith, kin, etc. are pretty wily, bless ‘em, so I have taken pains to be well concealed.

Or perhaps I’m just lurking behind well-drawn blinds in my usual workspace. Only the Shadow knows for sure — or is it my hairdresser?

In the interim, I leave you with a parable to ponder.

Even in an intensive retreat, one needs to take the occasional break, to clear one’s head. I was slushing my way through the soggy sand adjacent to A Body of Water that Shall Remain Nameless when I stumbled — literally — over the jolly fellow above, minding his own business, just as I was minding mine.

(And no, I’m not actually sure that this is a male starfish; somehow, sexing echinoderms was a subject my otherwise excellent education skipped. Grant me some poetic license here. Call the starfish George and be done with it.)

The stereotypical child-with-a-pail noticed me crouching in a tidepool, attempting to discover George’s best side for photographic purposes. “A STARFISH!” he screamed, frightening the seagulls. “Dad, there’s a real, live STARFISH!”

Okay, so it wasn’t Shakespeare; more profound things have been said about sea creatures, undoubtedly. A fellow of George’s debonair charm clearly deserved a more lyrical tribute. But the kid was six, perhaps, and anyone could see that he’d never seen the like of George in the wild before.

Or of George’s cousin, Ambrose, sunning himself on the next rock over, or his great and good friend Justine, clinging to the underside of a nearby rock with some peculiarly green anemones. Our young friend greeted each with rapture and an impressively consistent grasp of the obvious: “Here’s another STARFISH! Dad, a STARFISH!”

Our young hero’s presumptive father, a lumbering beast of a man fetchingly attired in his best Twisted Sister T-shirt and lumberjack flannels, ignored his excited offspring’s first 27 or so iterations of this sentiment. He was better occupied in rolling around on a blanket, grappling a mature siren in leopard-print spandex who kept looking pointedly away from the child every time he cried out.

Surreptitiously watching the boy’s continued fruitless attempts to share his joy, I found myself hoping that she wasn’t Mom — likely, considering that the boy never tried to call her attention to anything — and that Dad was not our boy’s custodial parent. Maybe this was an exceptional outing, a date and visitation unexpectedly falling on the same day, perhaps due to some tragic accident that temporarily (please let it be temporarily) incapacitated all of the extremely competent caretakers who usually took the child to fun places and paid lots of attention to him.

Although Exclamation #28 sounded to my untutored ear identical to those the child had uttered before, Dad seemed to find something exceptional in it; he disentangled himself from his date, leapt to his feet, and ran starfish-ward, screaming. “Ryan, don’t TOUCH it.”

Ryan was not, in point of fact, touching anything. He was pointing and shrieking: “Dad! A STARFISH!”

Evidently, the boy’s exceptional lung capacity was genetic, as was his extensive vocabulary: “Ryan, don’t get wet.”

Over the course of succeeding ten minutes of similar Edward Albee-worthy dialogue, any bystander within fifty yards would have learned that Dad’s opinions of proper beach behavior for a first-grader called for a complete avoidance of moisture, starfish (“STARFISH!”), sand, rocks, sea anemones (“LOOK!”), barnacles, pebbles, cast-off mussel shells (“A SHELL!”), and strange women fond of pointing any or all of the above out to a small child clearly thrilled to be encountering something new.

“BARNACLE!” (A word the lady had just introduced to his vocabulary.)

The lady, I need hardly say, was not bugged by the child anywhere near as much as by good ol’ Dad.

The formerly-grappled siren, too, seemed to find the latter’s propensity to loom over Ryan, bellowing, less satisfying than his earlier activities. Perhaps she, too, was puzzled at such interest from a parent formerly content not twenty minutes before to turn his back whilst his child flung himself repeatedly into waves cold enough to render a wet suit advisable, or perhaps she was merely miffed that Ryan had not yet been carried off by a passing shark. Whatever her no doubt rich and complex motivations may have been, she wisely chose to recuse herself from the great debate.

You know me, campers — like so many other professional readers out there, word and phrase repetition gets to me fairly quickly. I mean, shouldn’t one party or the other have noticed by now that saying EXACTLY the same thing to EXACTLY the same person was eliciting EXACTLY the same response as the last 15 times? If characters on a page kept saying the same things over again at a similar rate, Millicent wouldn’t just reject the manuscript; she’d burn it and do a little dance around its ashes.

Not only that — this scene was definitely slow; I would have cut virtually all of it. The essential conflict once established, the plot really didn’t seem to be going anywhere. Where was the character development? In what sense was this dialogue character-revealing? Where are the quirky tidbits and surprising statements that would make a reader want to see what these characters did next?

Allow me to let you in on a trick of the novelist’s trade: a character who bores the reader becomes unlikable QUICKLY. What’s more likely to court boredom than repetitious statements?

In the interest of changing the dialogue, then, if not to improve little Ryan’s starfish-related experience, I felt compelled to point out, “Excuse me, sir, but your boy doesn’t actually seem to be handling the wildlife. Perhaps you could assume that he’s heard you?”

An interesting anthropological phenomenon, formerly unbeknownst to me, abruptly manifested: in Undisclosed Location, I now know, women apparently only speak to men in order to indicate immediate sexual availability, rather than, as in my neck of the woods, to convey information or to encourage an exchange of ideas. In a time-saving move unfamiliar to those of us who live elsewhere (thank goodness), the locals evidently regard the actual content of a woman’s speech as secondary, or even irrelevant.

Or so I surmise, for Dad forgot all about both little Ryan and the siren in his eagerness to follow up on what he clearly regarded as an invitation; turning his back on both, he covered the ten feet between us with the speed of a chargng rhino. Predictably, he put all of his mastery of language into the come-on: “You alone?”

I can’t imagine why Ryan’s mother let this treasure get away. To make matters worse, Leopard Lady hoisted herself off her sandy blanket love nest, all set to mark her territory. Or so I assume from her single contribution to the scintillating intellectual exchange, “Hey!”

Perhaps it was selfish of me, but it seemed to be time to leave Ryan to what I’m guessing is going to be a lulu of a childhood. I’m sure his future therapist will find it fascinating. I backed slowly away, as a prudent person does when confronted with wild animals in their natural habitat.

Fortunately for my escape prospects, the kid provided a timely distraction. “DAD! There’s MORE over HERE!”

Without taking his beady eyes off me, Dad shouted, “Ryan! Don’t TOUCH it.”

I was gone before little Ryan could find another starfish, but as I rapidly put beach between me and the now re-grappled couple (oh, you wouldn’t have looked back?), I kept trying to fathom the mindset of someone who would bring a child to a beach — for what seemed to be the first time, judging by Ryan’s excitement level — and expect it to be a non-tactile experience. Was he afraid of his offspring’s getting dirty? Had Dad perhaps not noticed the nearby massive ocean, notable for the cleansing properties of its water?

Or was he afraid of the kid’s harming the beasties? But if so, what could possibly have been his objection to Ryan’s handling the occasional rock or cast-off bird feather?

Once again, I cursed their family’s non-revealing dialogue. More articulate characters would have told me far, far more in many, many fewer lines.

Now, the scene I’d witnessed could have been atypical of the family, of course. Perhaps this is a parent who routinely introduces his offspring to the joys of particle physics, for instance, or square dancing. Perhaps on a good day, Dad is overflowing with new and exciting vocabulary for Ryan to learn; maybe, if the universe is a good and loving place, he will eventually teach his child that it’s possible to construct a sentence that isn’t a command.

Admittedly, too, no one concerned — including and especially, I would imagine, George the starfish. (“STARFISH!”) — was actually in favor of Ryan’s poking at living creatures in a way that might cause them pain. And I certainly wasn’t the one who was going to have to deal with the kid if a rogue anemone suddenly detached itself from its comfortable rock and lunged for his jugular.

Yet after I had left the happy menage-à-trois (at least on court-ordered visitation days) far behind, I began to worry about little Ryan’s future intellectual and artistic development. How thoroughly (and repetitiously) Dad had stomped upon excited discovery of the new!

Shouldn’t adults worry when kids DON’T find the world around them thrilling and interesting, rather than when they do? How many times will Dad express similar sentiments before Ryan learns not to express enthusiasm about learning something — and how many times after that before he stops even feeling it?

Should little Ryan grow up to be a writer — I would dearly love to read this scene from his point of view, wouldn’t you? — he’s going to need every iota of his sense of wonder intact and fully functional. (Not to mention having a somewhat larger vocabulary at his disposal.) For what, after all, lies at the heart of the trenchant and surprising observations of the world around us that we writers so love to tuck into our manuscripts, if not the capacity to identify quirkiness in the mundane and point it out to others?

So keep on getting excited by those starfish, Ryan. I was pretty thrilled to discover George, too.

May you all discover starfish of your own while I’m writing up a storm on my retreat; may your meaty insights serve you — and your future readers — well. May your dialogue be interesting and character-revealing. Most of all, keep up the good work!

9 Replies to “The untouchable starfish”