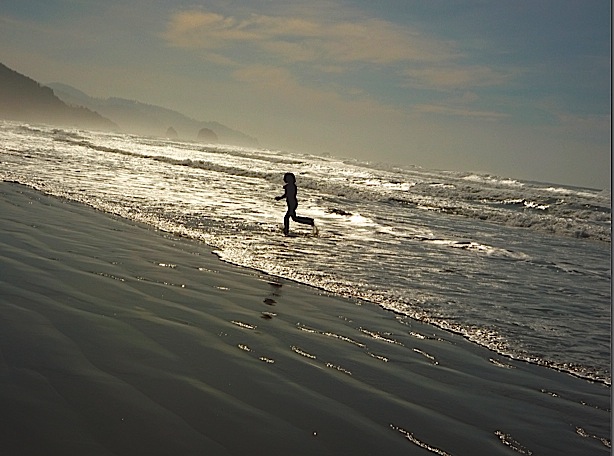 Howdy, campers! I’m returned from my writing retreat, bright-eyed, bushy-tailed, and any other animal health-related cliché you might like to insert here. I was in a magical land where the phone didn’t ring every five minutes, no one showed up asking to disturb me for just a sec, e-mail apparently didn’t exist, and, as you may see in the photo above, happy children were evidently able to run, if not actually walk, on water.

It was pretty fabulous. Especially the phone-not-ringing part; to give you a sense of the kind of peace I’m talking about, my mother-in-law wasn’t even certain what state I was inhabiting last week. I’m fond of her, but…bliss!

Those of us habituated to writing (or revising) under deadlines — a state of being with which most writers new to working with an agent are surprised to learn tends to crop up with some frequency as soon as one signs an agency contract, not merely after one sells a book to a publisher — often take retreats out of necessity, of course: editorial statements like “You can remove the protagonist’s sister, set the timeframe back ten years, and completely rearrange the last third of the book by three weeks from Thursday, right?” are more common than those fond of regular work hours might like.

Sometimes, the only way to meet a deadline is to lock oneself away where the phone doesn’t ring.

However, I’m a firm believer in the value of retreats for writers at every stage of their careers. Time and space to do literally nothing but concentrate on the writing process can be invaluable; imagine, for instance, having the luxury of no other demands so you could think about a revision before you commit to it, or to figure out several options for a story arc before trying to shape it on the page.

Just hold it right there, all of you who rolled your eyes at the very concept of a retreat, muttering, “Oh, as if I’d ever have time for that.” Allow me to suggest something: writers perpetually busy with non-writing projects usually benefit more from taking time just to write than those of us lucky (or dedicated) enough to be able to organize our everyday life to guarantee consistent stretches of writing time.

Why? Well, contrary to popular belief, writers in mid-project typically aren’t actually granted extra hours in the day or an additional day per week to ply their craft. No, not even if it’s a very good one indeed, or they’re very talented. The vast majority of the time, those of us bitten by the proverbial writing bug end up squeezing our beloved work in between all of the other demands of normal quotidian life.

Such as, to cite a completely hypothetical example, a mother-in-law who hasn’t yet grasped that a writer’s wanting to be left alone to work isn’t necessarily symptomatic of a deep, underlying hatred of either her or her son. Or that choosing to arrange one’s life so that taking the time to create vivid characters pretty much always trumps, say, ironing napkins isn’t a sign of warped values.

That’s one of the ways true artists can identify themselves, you know: the twin phenomena of longing to lock oneself up in a room alone for long periods of time and having at least one relative or friend who speaks about these sojourns as if they were a species of flagrant infidelity or deep perversion.

But I digress. My point before I veered off was this: as much as writers might like it if writing time just magically appeared in their schedules without its immediately being eaten up by something else, most of us lead such hectic lives that we have to fight for alone time to concentrate. The result, often, is really good book ideas that languish for months or years, waiting for their authors to find the time to get back to them.

Oh, it could happen, I suppose, without significant effort on the writer’s part — by, say, a modern miracle along the lines of a significant other’s spontaneously blurting out, “You know, honey, I’ve been calculating how much time you spend on housework in a given week. What if I took all of it off your hands, forever?”

I’m going to give you a moment to enjoy that one before I move on. Almost indecently attractive, isn’t it?

Or, for those of you who derive your fantasy fodder from the back pages of magazines like Poets & Writers, by winning a writing fellowship whose prize involves residency someplace remote and monastery-like. Or, depending upon your tastes, someplace mountainous, hot-tubbed, and hyper-social. (I’ve been in residence at both types of artists’ colony, so I can tell you from experience that both exist.)

Or a Horatio Alger event where you find a billionaire’s wallet (in Alger’s books, it was usually a millionaire, but a prudent person adjusts her fantasies for inflation), return it to him (always a him in these stories), and in gratitude for your all-American-boy honesty, he adopts you, leaving the rest of your life free to write. While he’s at it, he gives you the resources to rid the world of malaria, child starvation, and adult acne.

You know, so you have something to do in your spare time.

Oh, go ahead and laugh, but I meet writers all the time whose primary efforts toward creating significant chunks of time for writing in their lives seem to go toward indulging in this sort of fantasy. Not necessarily so flamboyant, typically, but still fantastic: I’ll sit down with it next week/next month/next year/after I retire or I’ll finish it when the kids are in school/out of school/finished with their medical residencies.

Or, more commonly, I’ll work on the book on my next vacation.

That sound those of you reading this outside the continental U.S. heard after that last one was the giant collective guffaw from the vast majority of Americans whose jobs don’t give any vacation time at all. Even though we have more working creative artists per capita than anywhere else on earth (true; look it up), being able to take as much a week or two off work is beyond most people’s reach.

So I would feel very lucky about my recent sojourn, mother-in-law or no. And does every retreating writer’s kitty celebrate her return by capturing an impressively large rodent and delivering it to the doormat as a welcome-home-and-where’s-my-kibble gift? I think not.

Obviously, I am a most fortunate woman. (And don’t you feel most fortunate that I went with the kid-on-the-beach photo, rather than one of Kitty’s present? But I’m digressing again.)

I always feel a little sad when I hear good writers say that they’re going to put off serious, roll-up-your-sleeves writing or revision until some dim future point when they will have unfettered time. These days, time tends to be inherently fettered and, as I mentioned, not all that prone to untying itself without some help.

Okay, now I’ve depressed myself, thinking about all of those nice, talented people with no time to write. I had been planning to use these ruminations to lead up to some pithy, practical advice about how to structure a personal writing retreat productively, because there’s quite a bit more to it than just finding a quiet room someplace and locking the door. However, now I feel as though I should come up with some tips about how to carve time out of a busy schedule to write.

Unfortunately, all of the blog-about-it notes I scrawled on the back sides of envelopes were about the former. (The key to successful improvisation is advance preparation, right?) I shall have to give the latter some serious thought, ideally after I’ve had some sleep in my own bed.

And also given Kitty’s little present a decent burial, and paid some necessary attention to my mother-in-law.

Tell you what: if you promise not to think I’ve skirted around a difficult issue with averted eyes, I shall devote my next post to fleshing out those notes on individual retreats — which tend to be far, far less expensive than the formal, let’s-get-together-with-a-bunch-of-other-artists variety. Then, in the days to come and while I am leading you through the mysteries of constructing a winning author bio (it’s been well over a year since I last broached the issue), I shall ponder tips for freeing up writing time on a daily basis.

In the meantime, will you do me a favor, please? I’m looking forward to spending the next couple of months talking primarily about craft issues, since we spent the warmer months delving into marketing ones. I have a small stack of craft questions from readers (I haven’t forgotten you, Harvey!), but I would love to hear more suggestions for what to tackle in the weeks to come.

I’m excited to be back in the blogging saddle again. Keep up the good work!

7 Replies to “I’m back! (And other self-evident statements)”